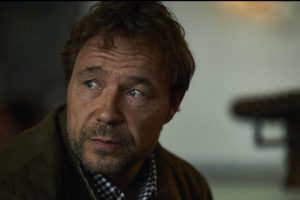 ITV’s The Walk-In continues tonight, and the new Stephen Graham drama prompts viewers to consider whether people can truly change – and that’s what makes it so gripping.

Warning: this article contains spoilers for the second episode of ITV’s The Walk-In.

Off the bat, we knew that Stephen Graham’s new ITV drama was going to make for confronting viewing. It’s a series concerned with the rise of far-right nationalism and neo-Nazis– so not the lightest watch in the world, but one that’s incredibly important.

You see, amid the Nazi salutes, the derogatory phrases and brutal assaults we’ve witnessed already in the series, The Walk-In really does a stellar job of leaving you contemplating one central question: is anyone really capable of meaningful and truthful change?

When it comes to Matthew Collins (Stephen Graham), we get a better sense of his past in the coming episodes. From the first episode, we understand Collins to be a deeply sympathetic and intelligent man, someone who’s transformed his life around by advocating and fighting on behalf of marginalised communities. But it’s a far cry from his past as a neo-Nazi, and in episode two, we’re introduced to Collins as a bright-eyed teenager who has just embarked on a new life in the far-right.

Andrew Ellis stars as Robbie in ITV’s The Walk-In.

Episode two contains one of the most shocking scenes of the series: Collins and his group target a community library that is holding a women-only event. The flashback is our first proper insight into a more violent side to Collins and upon walking into the library, he punches an old man who’s questioning what the group of men are doing there.

He then continues on into the library where the group of bald white men he charges in with proceed to assault, chase down and throw chairs at the innocent women and teenagers in the room. It’s the kind of scene that will leave you audibly gasping; it’s unexpected, shocking and will leave many viewers angry. The grisly, fast-paced scene also shows that these men certainly don’t care about gender or age when committing violent assaults.

Upon seeing Collins in such a light, as viewers, we then have to reckon with that vision of him in the newfound image of stability he’s offered us in the series so far – and it’s difficult. We know Collins is leading the charge of activism and has dedicated his life to taking neo-Nazi groups down, but the fact still remains that his past is one that will leave shivers down your spine.

So, can a person like that really change? Graham delivers an emotionally charged and thoughtful performance as Collins, and in doing so, we’re left with this compassionate image of a man who would rather forfeit family holiday time and days out to bring National Action to an end. But we’re not only forced to contemplate this question with Collins, we’re presented with this line of moral questioning when it comes to Robbie (Andrew Ellis).

We’ve assumed that Robbie would be the inside man of this series, and in the following episodes, his identity is revealed as such. He messages Collins initially under the alias of Lucas Harrison after the Manchester Arena bombings take place. He provides Collins with information he can use in his forthcoming articles on Hope Not Hate, but Robbie’s motivations are unclear. He feels like things in the group are spiralling out of control, but does he disagree with what National Action is doing? Is the racist thinking he’s been indoctrinated with emblematic of his own beliefs or is he just following the people around him?

It’s hard to reckon with Robbie’s motivations, his personal feelings and that of National Action, but that’s the point – the series shows us that these groups operate under a mob mentality, and because of it, it’s hard to decipher what each individual thinks versus what they’ve been conditioned to believe. We see it when Robbie mentions the conspiracy theory of Jewish people withholding the cure for cancer to his sister. When he’s questioned about it further, he can’t really explain the intricacies of the theory, so instead, he just glosses over fact with bitterness and resentment.

At the end of the second episode, we see both Collins as a teenager and Robbie in the present come to terms with their newfound realities and we can see that they’re not comfortable with them. We witness Collins confide in the police and see Robbie call Collins about MP Rosie Cooper and the new National Action plot to kill her.

These are two men who aren’t here to illicit outright sympathy, but rather, through The Walk-In’s exploration of these characters, we see how the cruellest and most ill-intentioned of people can meaningfully strive for change.

The second episode of The Walk-In airs tonight at 9pm on ITV, with all episodes available to stream as a boxset on ITV Hub.