Home » Entertainment » The new trailer for American Horror Story: NYC is here and promises to be a “season like no other”

The new trailer for American Horror Story: NYC is here and promises to be a “season like no other” 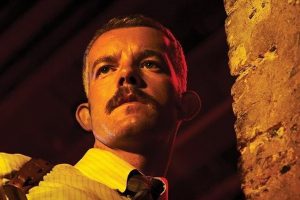 American Horror Story: NYC is the next instalment in the beloved gory TV series franchise – here’s everything you need to know about it.

It’s well and truly horror season, people. It’s colder, Halloween is only a few weeks away and we’re ready for all TV and film things to give us frights and nightmares aplenty.

Aside from the slate of new horror films and TV shows landing on our screens, there’s one series in particular that horror fans have been patiently waiting for. Can we really talk about jump scares, gory horror and frightening plotlines without mentioning American Horror Story?

The acclaimed series premiered back in 2011 and has undoubtedly catapulted creator Ryan Murphy’s career to dizzying heights. Yes, we may still be reeling from his most recent disturbing foray into true crime but if previous seasons of AHS and his new film Mr Harrigan’s Phone are anything to go by, this new instalment of AHS is set to be bigger and better than before.

Now, with a new teaser trailer for American Horror Story: NYC,the eleventh in the series, you can rest assured that our excitement notched up another step. This time around, the anthology series takes us to New York City and it’s not one to be missed.

Here’s everything you need to know about it.

What is the plot of American Horror Story: NYC?

It’s safe to say that the new series has been shrouded in mystery. With minimal plotline details being released (read: absolutely none), we’ve been left to piece together the possibilities of the new series taking place in the Big Apple. We know that “something evil is coming”, as per the series’ tagline, but aside from that – and some risqué first look images – little is known about the new season.

We do know, though, that the eleventh instalment comes after a stellar 10-season run of iconic moments, including Coven, Murder House and Asylum, to name a few.

Who will star in American Horror Story: NYC?

One of the main things we love about the show is that familiar faces continue to make appearances throughout the series. In this instance, some of the mainstays include Patti LuPone, Billie Lourd, Zachary Quinto, Sandra Bernhard, Denis O’Hare, Isaac Powell and Leslie Grossman.

Is there a trailer for American Horror Story: NYC?

The new teaser trailer gives us a very brief glimpse of the series and we mean it when we say it’s very brief.

We’re taken through a crowded New York nightclub, complete with leather, spikes, latex boots and a lot of blood. But the trailer quickly flashes up phrases revealing the new series to be the “deadliest year” and a “season like no other”.

Watch the teaser trailer for yourself here:

When and where will American Horror Story: NYC be available to watch?

The new series of American Horror Story will premiere on FX on 19 October in the US and will soon be available to stream on Disney+ under the Star banner in the UK and other territories. Watch this space for updates.