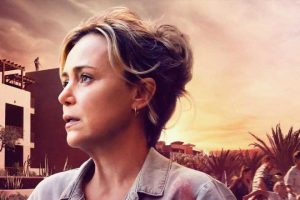 Calling all Keeley Hawes fans: here’s everything we know about her new BBC TV series, Crossfire…

There’s something about a hard-hitting drama and Keeley Hawes that just simply works. With starring roles in The Midwich Cuckoos, It’s A Sin, Line Of Duty, Finding Alice and Bodyguard, Hawes has become known for her varied (and all very excellent) portrayals in some of BBC’s biggest dramas.

So you already know we’re brimming with excitement at the prospect of seeing her hit the small screen again in Crossfire, BBC One’s new drama. Now, we not only have a brand new trailer to add to the anticipation, but also the news that the series will be coming to our screens soon.

Here’s what you need to know about Crossfire.

Best new TV shows coming out this autumn 2022: 17 series to add to your watchlist

What’s the plot of Crossfire?

Crossfire is set in a luxurious resort in the Canary Islands and focuses on Jo (Hawes), who is enjoying a relaxing holiday until all hell breaks loose in a life-changing sequence of events.

“Sunbathing on her hotel room balcony while on a dream holiday with her family and friends, Jo’s (Hawes) world is turned upside down when shots ring out across the complex. Gunmen, out for revenge, have, in an instant, turned a slice of paradise into a terrifying heart-breaking hell.

“A story of survival and resilience, Crossfire is an edge-of-your-seat nail-biting thriller yet also emotional, intimate and relatable. With the unsuspecting holidaymakers and hotel staff forced to make monumental split-second life or death decisions, the consequences will linger long after the final shots are fired.”

Sky’s The Midwich Cuckoos review: this Keeley Hawes-led thriller blends unexpected pregnancy, small town life and the supernatural in the creepiest of ways

Who will star in Crossfire?

The series is also directed by Tessa Hoffe (Kin, Wayne), and produced by Alex Mercer (Inside Man, Doctor Who).

Best TV shows of 2022: 80 brilliant TV shows you need to watch this year (with release dates)

Is there a trailer for Crossfire?

There most certainly is. The new trailer may just be one minute-long but it really does deliver on the tension. In it, we quickly get a sense of the upsetting scenes that will unfold in this drama. We see people running, tripping over and children hiding until we pan to Jo (Hawes) who is sat in the rain. She asks herself: “Why didn’t I appreciate normal life? How could I not have realised how fragile it all was?”

We see her ripping up newspapers that have her image emblazoned on the front of them, labelling her as the “hero of holiday horror”. Evidently, along with the trailer’s existential questioning, it’s clear that Jo is grappling with the events of the shooting long after she’s returned home. “It was always going to end like this,” she says.

Watch the trailer for yourself here:

What are people saying about Crossfire?

The series is created and written by Louise Doughty (author of Apple Tree Yard) and is her first original series for television. Speaking about the upcoming series, she says:

“This is a drama about a group of ordinary people caught up in an extraordinary event – a gun attack on the hotel where they are staying. In extremity, each character is faced with a set of dilemmas: and at the heart of it is Jo, who booked the holiday and unknowingly put her family and friends – and herself – at risk. I’m fascinated by the idea of how so-called ordinary people respond to intense pressure and I couldn’t be more excited to have written this drama for Dancing Ledge Productions and the BBC and to have the amazing Keeley Hawes in the star role.”

Talking about the role, Hawes says: “I’m so excited to be embarking on this brilliantly compelling and propulsive drama for the BBC, especially as it’s the third production for Buddy Club. Filming has already begun and we’re delighted to be collaborating with the team at Dancing Ledge Productions and Louise Doughty on her first original production for television.”

Piers Wenger, director of BBC Drama also says: “Louise’s scripts crackle with adrenalin, intrigue and secrets kept among a long-standing group of friends. But amidst the action and emotion, Crossfire explores the consequences of the secrets we keep, the risks we take and the lies we tell to conceal them. This is a startling original piece of writing. We are thrilled to be working again with Louise and Dancing Ledge Productions, and to be welcoming back the unmissable Keeley Hawes to BBC One.”

When will Crossfire be available to watch on TV?

While we don’t have an exact release date, we do know that the BBC series will be “coming soon” so we can expect to add it to our growing autumn watchlist.

Watch this space for updates.