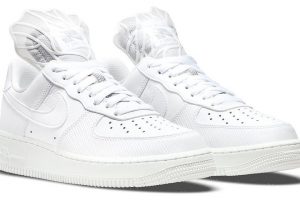 Continuing to offer more takes on the Air Force 1 Low,

Additional branding comes in the form of midfoot Swooshes, “NIKE AIR” and the goddess’ symbol victory embroidered at the heels, and printed insoles marked with the ancient Greek figure and the definition of her name. Rounding up the design of the shoes are matching white classic AF1 sole units.

Priced at $130 USD, the Nike Air Force 1 Low “Goddess of Victory” is set to release in the coming weeks.