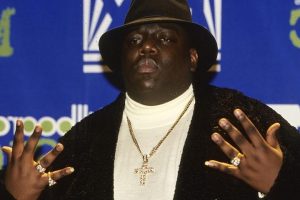 The GRAMMY-nominated album’s re-release is set to drop on June 10 and will feature a total of eight LPs, a booklet highlighting rare photos from the album cover shoot, liner notes by music writer Sheldon Pearce and “exclusive reflections from members of the team who worked on the original album.” Fans can also look forward to the 12” of hits “Hypnotize,” “Mo Money Mo Problems,” “Sky’s The Limit” and “Nasty Boy.”

Prior to the release of 8-LP box set, New York City will be celebrating what would have been Biggie Smalls’ 50th birthday. On May 20, the Empire State Building will host a ceremony with the rapper’s family, his mother Voletta Wallace, his children CJ and Tyanna Wallace and dear friends Lil’ Cease and Lil Kim, and on May 21 — the actual day of the legendary artist’s birthday — the landmark’s lights will be changed to red and white, and will feature a crown spinning its mast as a homage to Ready to Die.

Over in Brooklyn, the Barclays Center will be sharing a video montage of classic Biggie Smalls records on the oculus display above the entrance — which is located just a few subway stops from the neighborhood of Bedford-Stuyvesant where the rapper grew up. The New York City MTA will also release a special edition MetroCard with a Notorious B.I.G. design, that will only be available in the subway stations of Lafayette Avenue, Clinton – Washington Ave. and Atlantic Ave. – Barclays Center. There will also be a station takeover of the Clinton – Washington Ave. stop by Amazon Music and [RE]DISCOVER.

Finally, an orchestral tribute to the rapper slated for June 10 will take place at the Lincoln Center, with the creative black-tie event open to the public. Amazon Music will livestream the event on Twitch.

Elsewhere in music, an MF DOOM biography is in the works.
Source: Read Full Article