Home » The People in the Neighborhood

The People in the Neighborhood

Weeks later, we’re still thinking about the witnesses in the trial of Derek Chauvin, and the way they were connected in telling the story of how George Floyd lost his life. This phenomenon is reflected in works of art, like Spike Lee’s “Do the Right Thing,” which explores the conflict inherent in a community.

‘Do the Right Thing’ | Anatomy of a Scene

Spike Lee narrates a sequence from his film, which celebrated its 30th anniversary in 2019 with a digitally restored Blu-ray edition from the Criterion Collection.

Hello, everyone. This is Spike Lee, the producer, writer, director of ‘Do the Right Thing.’ This past June was the 30th anniversary of this film. I know the column is called ‘Anatomy of a Scene.’ I’m renaming this. I’m calling this ‘Anatomy of a Murder.’ The chokehold of Radio Raheem, played by the late, great Bill Nunn, my Morehouse brother— ”(SINGING) Fight the power. Fight the power. We’ve got to—” —was based upon the death of Michael Stewart. September 1983, Michael Stewart, a graffiti artist— he’s about as big as I am. 11 New York City transit police jumped on him and strangled our brother to death. That’s where I got the idea for the chokehold murder of Radio Raheem. And five years ago, Eric Garner died the same way that Radio Raheem did in a movie that was based upon the real life choke hold of Michael Stewart. So a lot of things in this film that even though it was written 31 years ago are still happening today. Black and brown people are still being murdered today by police forces across the United States of America, and the people who inflict this death walk free— don’t get fired, don’t get suspended. The film takes place one day, the hottest day of summer, in the People’s Republic of Brooklyn, New York. So tensions have risen all throughout the day. And the reason why it looks the way it is because the edict, the command, to Ernest, the DP, Wynn Thomas, the production designer, Ruth Carter, the costume designer— here’s what I told them. I said, look, I want people to be sweating in an air conditioning theater when they see this film. [CRASHES] And what we wanted to do is after he destroys the boombox, it’s quiet like the calm before a storm. Everybody’s like, what’s next? Everybody knows it gonna be bad. Everybody’s looking around— Radio Raheem. I mean, that was personal. It was like he got beat with the baseball bat because you’ve seen him the whole film with his boombox blasting Public Enemy’s ‘Fight the Power.’ We did not have a very good stunt coordinator, and people got hurt. Danny Aiello’s son, Danny Jr., was his father’s double right here. This film was shot on one block in Bedford Stuyvesant. That one block got renamed ‘Do the Right Thing Way,’ the only street in the history of New York City named after a movie. [COMMOTION] Well, we gotta show that, number one, Sal’s Famous Pizzeria, is on the corner of the block directly opposite the Korean fruit and vegetable stand. So the fracas spilled out from Sal’s pizzeria to the street. So we had to show the block getting involved. “Fight!” “Mookie!” We wanted to start down and crane up so you could see the block. [COMMOTION] “Kill you! We’re gonna kill you, Sal!” And this becomes a brouhaha. Ozzie, trying to talk some sense— the love hate rings which is a homage to ‘Night of the Hunter.’ Robert Mitchum had them tattooed on his fingers. Now the cops come. Now we already have seen these two cops already. That’s Rick on the left— that’s Rick Aiello, Danny’s son. “Break it up! Break it up! Get off him! Get off him! Get out of the way!” And Sandoval play the other cop— Miguel Sandoval. Now you know if there’s a fight, who are they gonna grab? “You get over here!” [INTERPOSING VOICES] So this is a very hard scene to shoot. And for 31 years, it’s been a hard scene to watch. [INTERPOSING VOICES] “Just take him down, man.” “Goddammit, you’re killing him! You’re killing him!” “Give it up, asshole! Give it up!” This is the Michael Stewart chokehold. And when that Eric Garner thing happened, I put on my Instagram and Facebook with my editor, Barry Brown, and we cut back and forth between Radio Raheem and Eric Garner. And it’s the same thing. “Radio Raheem!” “Radio Raheem!” “No!” And then when he falls, we laid the camera down on the street so he would fall right into the lens. 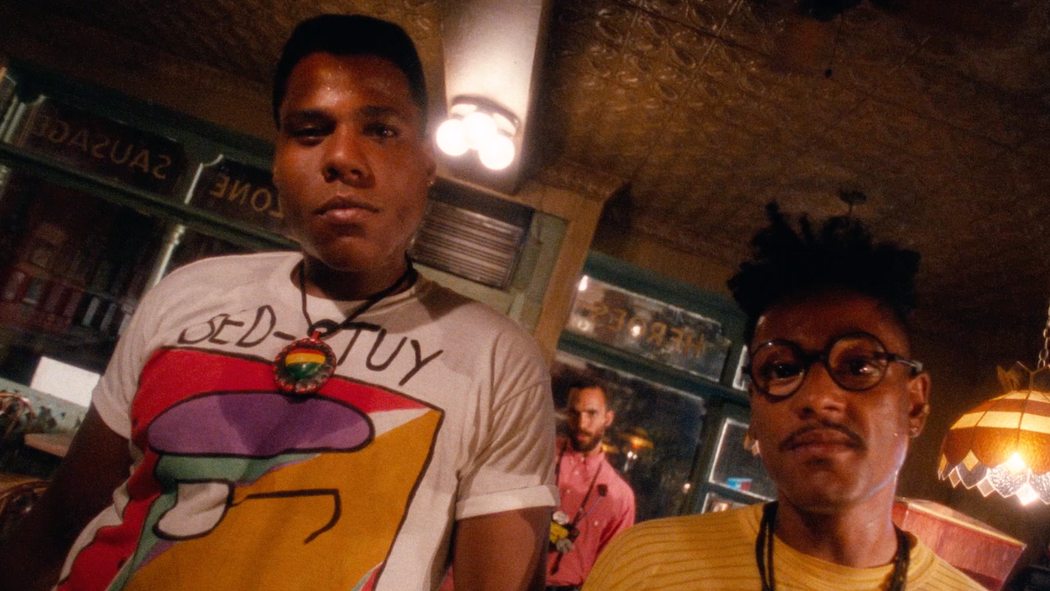 Wesley called the 1989 Spike Lee film “the greatest American movie ever made about community.”

Although the film is now 32 years old, it has striking parallels to the circumstances surrounding the tragedy of George Floyd. For one, the murder of Mr. Floyd — and the gathering of witnesses — transpired outside of Cup Foods, a corner store in South Minneapolis, where Mr. Floyd had tried to buy a pack of cigarettes. In “Do the Right Thing,” the locus of action is Sal’s Pizzeria, where the Black customers from the neighborhood clash with the Italian-American owner.

The film explores “what it means to be in a community that can also turn into a pressure cooker,” Jenna said. “The ultimate tragedy about this movie,” Wesley added, “is that it is going to be ageless.”

Capturing the Trauma of Racism

In the last five years, a class of films and television shows made by and starring Black people “purport to speak to an aspect of what’s so difficult about being Black in this country,” Wesley said. They’ve spanned genres, like horror (“Get Out” and “Them”), science fiction (“Lovecraft Country”) and drama (“Two Distant Strangers,” “Queen and Slim” and “Judas and the Black Messiah”).

“We’re drowning in things that are trying to capture the feeling of what racism is like in this country,” Wesley said. But the reason these properties ultimately feel limiting is because they’re fixated on emphasizing the violence of racism. This sentiment was recently encapsulated in a Twitter post made by the author Brit Bennett:

Wesley Morris is a critic at large. He was awarded the 2012 Pulitzer Prize for his criticism while at The Boston Globe. He has also worked at Grantland, The San Francisco Chronicle and The San Francisco Examiner. @wesley_morris

Jenna Wortham is a staff writer for The Times Magazine and co-editor of the book “Black Futures” with Kimberly Drew. @jennydeluxe