The Perseid Meteor Shower Might Be This Year’s Best 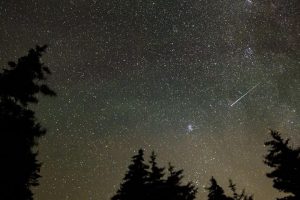 Tonight’s Perseid meteor shower could very well be the best one of this year. So now would be a good time to dust off your lawn chairs.

According to The Old Farmer’s Almanac, the Perseid meteor shower happens every year from July 23 to August 22. However, it usually reaches its peak from midnight on August 11 to dawn on August 13. The peak is characterized by the greatest number of meteors that fall per hour. The best place to view the celestial spectacle is anywhere in the Northern Hemisphere. In this region, stargazers can expect to see more than 40 meteors per hour if they are far away from light population, according to NASA. City-dwelling stargazers might only see a few per hour.

In order to get the full experience, The Old Farmer’s Almanac suggests going outside 20 minutes before the peak to let your eyes adjust to the night sky. After that, just sit back and look up. However, be prepared to exercise a bit of patience as the meteors won’t come all at once.

In related news, a NASA-funded Moon mission is taking off from New Zealand later this year.
Source: Read Full Article