Home » Entertainment » The Physical and Spiritual Art of Capoeira

The Physical and Spiritual Art of Capoeira

VALENÇA, Brazil — The white-bearded, dreadlocked master and his bushy-haired student face off in an open-sided compound set amid cacao trees and coffee bushes.

The two are in constant motion, swinging back and forth in what is called the ginga — the fundamental movement of the Brazilian combat game capoeira. At times, the way they feint and kick, and roll under and over and around each other, looks like choreographed dance.

But then one side does something the other is not expecting, and it becomes clear that this is a game of strategy, not a planned dance. Mestre Cobra Mansa’s ginga transforms into the movement of a staggering drunk, then a marionette whose puppeteer has suddenly let the string go slack. Then he’s in a handstand. From there, a leg strikes out like a lightning bolt, stopping just short of hitting his opponent’s face.

The circle of men and women surrounding the combatants are engaged in a hypnotic call-and-response song about an encounter with a dangerous snake. It’s intoned to the beat of Afro-Brazilian drums and the twang of single-stringed gourd instruments called berimbaus.

The participants — Brazilians mostly, but also Uruguayans, Russians, Ethiopians and Puerto Ricans — have come to the 80-acre property of Mestre Cobra Mansa (or, Master Tame Snake) on the outskirts of Valença, a small coastal city in Bahia, for a three-day retreat called Permangolinha. Its name (and its purpose) are a mash-up of the sustainable farming system known as permaculture and Capoeira Angola, the capoeira style that Mestre Cobra Mansa, 58, teaches.

The event also attracts masters friendly with Mestre Cobra Mansa, including Mestre Lua Santana, from the interior of the state; and Mestra Gegê, a rare female master who also teaches in Valença. 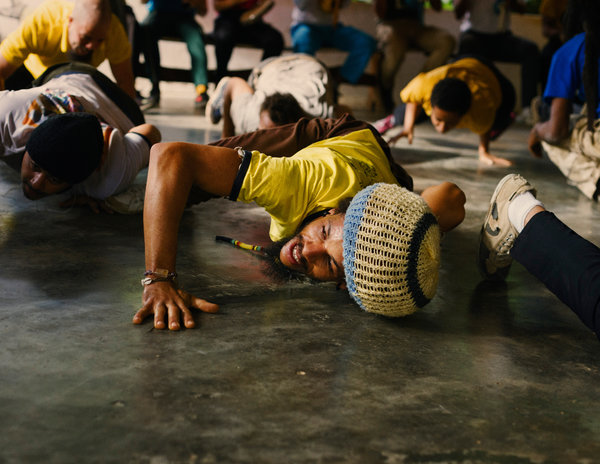 Mestre Cobra Mansa, known to the government and few others as Cinezio Feliciano Peçanha, bought this property, now called Kilombo Tenondé, about 15 years ago and has transformed it from pasture to a permaculture practice, in which diverse crops are raised together in a setting that mirrors the interdependence of a forest.

To him, it’s a way of bringing mostly urban capoeira practitioners — he grew up in the poor outskirts of Rio de Janeiro — back to the land, from which much of capoeira tradition emerged.

A balance between beauty and efficiency

Capoeira developed out of the combat games that came to Brazil with African slaves. Couching their practice as dance, the slaves trained in capoeira as a form of resistance and self-defense. Even after Brazil abolished slavery in 1888, capoeira was viewed suspiciously by authorities and its practitioners often harassed or imprisoned.

The creation of Capoeira Regional in the 1930s, a more formalized practice that imitated aspects of Eastern martial arts, complete with ranks and competitions, is usually credited for bringing it out of the shadows. Capoeira Angola follows a more originalist bent, focusing on cultural and spiritual aspects — but not without an element of show.

“I don’t want simply to hit someone,” Mestre Cobra Mansa said. “It’s a balance between beauty and efficiency.”

So is it a dance, a fight or a sport?

“If a guy uses a ‘stingray’s tail’ move and kills someone, are you going to write about in the arts section?” Mestre Cobra Mansa said. “No, but it’s art!”

Participants at Permangolinha, most of whom have practiced capoeira for years, are quick to note that its impact goes far beyond the physical game.

“It’s everything,” said Elena Kilina, a 30-year-old Russian living in São Paulo. “It’s music, it’s instruments, it’s another language, it’s a lifestyle, it’s a philosophy. Capoeira for me is an inevitable part of life.”

For Brazilians and other practitioners of African descent, capoeira can take on additional meaning. Like so much in the state of Bahia — music, cuisine, the syncretic religious practice known as candomblé, it is tied to Africa. Mestre Cobra Mansa named his property Kilombo Tenondé after the quilombos, communities founded by escaped slaves, that are entwined with capoeira as symbols of resistance.

Ricardo René Díaz Ortiz, a 23-year-old on a Fulbright teaching fellowship in Brazil, calls capoeira “a tool for self-decolonization” the likes of which he had never come across in his native Puerto Rico. “To me capoeira becomes a way of connecting with an ancestry that was robbed from us.”

“It’s tied to our African roots,” said Florentine Santos Machado, a 19-year-old from Valença who started practicing capoeira when her family lived in her mother’s native Germany. “It goes well beyond being a sport, because it doesn’t just involve the body. That’s where we get the idea of capoeira being something bigger. You see the importance of being connected to it.”

Permangolinha’s two-dozen or so participants — the number ebbs and flows throughout the weekend — stay in simple bunk rooms or camp on the property. The main building has no restrooms; a large outhouse has water-free compost toilets and cold showers. Volunteers help cook hearty vegan meals mostly from what grows on the property, like butter collards for salad, and cupuaçu, a sourish, oblong cacao relative, for juice.

There are workshops on things like berimbau-making and maintaining an agro-forest. Adalicio Manuel de Jesus, whose family has farmed the area for three generations, showed a group how he grafts branches of high-yield cacao trees to strong-rooted, pest-resistant ones, raising productivity without using pesticides.

As rain pattered on the roof during a Saturday session, Mestre Cobra Mansa called for volunteers. “How many of you know the length of your leg?” he asked. Herlen Ramos Santos, a 39-year-old capoeirista stepped out. Mestre Cobra Mansa had him ginga in front of a chair, instructing him to kick out when thought he was exactly one leg’s length away. When he did, the middle of his calf came down on the top of the chair. His leg was considerably longer than he thought.

Mr. Ramos Santos will bring that lesson home to Ilheus, a colonial city down coast, where he teaches free capoeira lessons. “As you evolve, you have the obligation to teach others as well,” he said. “It’s fundamental in capoeira that you don’t keep everything you learn to yourself.”

‘When he strikes your foot with his face’

Mestre Cobra Mansa also teaches malícia, which means “malice” but here refers to feints and trickery. He instructs his students to catch their opponents off guard, use their energy to your advantage. “The most beautiful move is not where you strike his face with your foot,” he tells them. “It’s when he strikes your foot with his face.”

The high points of the weekend are the formal circles, known as rodas, on Friday and Sunday.

“The roda is a ritual of confraternization,” Mr. Ramos Santos said. “Everyone together forms a whole, everyone becomes one. There’s no pre-established thought to what is going to happen — it’s the circle’s energy that conducts it, the musical energy.”

“Entering the roda, for some people, is very hard,” Ms. Kilina said. “Capoeira teaches you how to face yourself. How people respond, how they attack, what’s their reaction to your aggression shows you who the person is. If someone makes me angry, I will provoke. It reveals you completely.”

At the Friday night roda, students saw Mestre Cobra Mansa provoked. He was matched against his former student, Mestra Gegê (Maria Eugência Poggi e Araújuo), 45. The circle oohed as she landed a two-legged flying kick on him. He came at her furiously, and she hopped out of the roda, essentially conceding.

“Would you have stayed?” she asked later.

“Capoeira is about the postures we take toward life,” said Díaz Ortiz, the Fulbright fellow. “It’s about how we’re going to interact with the world. And that goes into permaculture or being vegetarian or what kind of job you have. How did you take the lessons you learned in the roda from the mestres, and use that to define your relationship to this society.”