The Prayer at the Heart of a ‘Quintessentially French’ Opera

When Yannick Nézet-Séguin learned a few years ago that he would be the next music director of the Metropolitan Opera, he thought about works he was especially eager to conduct. Two came to mind: Debussy’s “Pelléas et Mélisande” and Poulenc’s “Dialogues des Carmélites.”

Both, as it turned out, were featured in his first season in the position. “Pelléas” returned to the Met in January, and John Dexter’s spare and poignant 1977 production of “Dialogues” will come back for three performances beginning Friday.

“I’m almost a little sad that I did this back-to-back with ‘Pelléas,’” Mr. Nézet-Séguin said in an interview at the Met. “Now I’ll have to wait a few years before I get a chance to revisit them.”

“Dialogues,” inspired by a true story of Carmelite nuns who were guillotined as casualties of the French Revolution’s anti-religious fervor, was written in the 1950s and first performed in 1957. It is a rarity among operas of that era: firmly established in the repertory, beloved by musicians and audiences alike.

“The power of this piece is all that’s nonreligious: how, within the context of a community, you have power struggles, fear, lack of trust,” Mr. Nézet-Séguin said. “And now, more than ever, we see how important it is for women to stand up for themselves in a society that wanted to leave them on the side.”

While Mr. Nézet-Séguin has had a virtually lifelong love for “Dialogues,” this revival will be his first time conducting it. Well, kind of: He worked on the opera in his mid-20s, when he was the chorus master of Opéra de Montréal in Canada.

“It just brought a very special emotion,” Mr. Nézet-Séguin recalled. “Maybe because I was raised Catholic and knew a lot of nuns when I was a child.”

He grew up in Quebec, attending Mass often and finding himself fascinated by nuns’ dedication to God and prayer. This led to involvement with his church’s choir — which may be why, he said, he didn’t experience the same crisis of faith many of his peers did as teenagers: “For me, going to Mass was about singing.”

Asked about his favorite page from Poulenc’s score, Mr. Nézet-Séguin chose a prayer — and not the Salve Regina that ends the opera, as the nuns are executed one by one. Instead, he picked a setting of the Ave Maria that they sing near the beginning of Act II. Here are edited excerpts from a conversation about it. 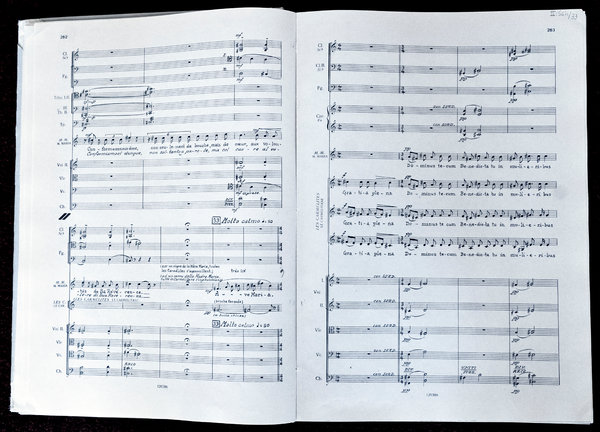 It was actually almost impossible to decide on one. It’s like choosing a favorite child. But this highlights what’s so special about this opera, which is not only the highly religious context, but also how religion is used as an expressive vehicle.

The Ave Maria starts with the nuns humming under Mère Marie [the second in command at the convent]. Most of the opera is about the conflict and competition between her and the new prioress. She says before this: Let’s agree to obey our new leader, not only with our mouths, but also from our hearts.

This is where Poulenc is such a genius, and a bit like Verdi: with minimal effects, which are so direct. The brass have this chord that indicates something solemn, but then the cellos intervene with this beautiful C sharp, which creates a dissonance.

This leads to the prayer, which is divided in the chorus. And it’s just so beautiful; every beat is more beautiful than the other. Poulenc is asking here for the music to be “très lié” — it has to be legato and intimate. People often assume that prayer is slightly distant, but it’s the opposite here.

Poulenc is far from the first composer to include prayer in opera.

With composers you often see a kind of struggle with religion. Whenever they set prayer to music, it reveals something intimate. For Beethoven, it was anger at having to put some of the Credo text in his “Missa Solemnis,” which comes out as something unsingable. In the case of Poulenc, his partner in life [Lucien Roubert] was struggling with disease and death.

Poulenc became obsessed with writing “Dialogues,” and that was his way of coming to terms with life after death. This is why, I believe, it touches the essential question of life after death and why this piece goes beyond your own humanity. You hear the religious aspect of it, but you know it’s so much more.

Can you also describe what this moment shows about how Poulenc sets text?

In such a quintessentially French piece, the cadence is important, much like “Pelléas.” It’s called “Dialogues” — so it’s based on dialogues, it’s very wordy. Most of it feels like recitative. It’s rare that we can identify something that feels like an aria.

In “Pelléas,” you get this huge recitative, but Debussy being Debussy, it’s much less vertical. It’s all about horizontality. It should feel like swimming. “Dialogues” should feel like anything but swimming. It’s so similar to “Pelléas” in the setting of the text, but it’s a totally different experience. It’s so much more structured. There’s always something feeling the beat; the chords are like pillars of a church.

What do you mean when you say “quintessentially French”?

The piece is French, as a context, because of the Revolution. But musically it is, too, in being as refined and complex as “Pelléas” or anything by Ravel. It’s also the successor of Fauré, and some Saint-Saëns.

There is a restraint. This opera presents you the text and the music in a really streamlined way. It affects the soul and the emotion of the listener, in a very direct way. And that I find really French.

Dialogues des Carmélites
Friday through May 11 at the Metropolitan Opera, Lincoln Center; 212-362-6000, metopera.org.