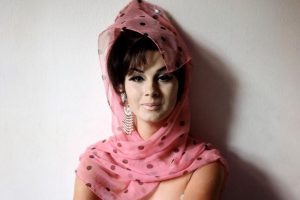 April Ashley was a trailblazing model, actor and author and her life story is set to be explored in Channel 4’s new documentary The Extraordinary Life Of April Ashley.

As part of Channel 4’s Pride coverage, a new documentary airs tonight that will uncover the story of one of Britain’s most iconic transgender pioneers.

The Extraordinary Life Of April Ashley tells the story of celebrated trans icon April Ashley. Her life was one of notoriety; she went from a sailor in the merchant navy and became a Vogue model and a mainstay in the inner circles of London’s high society.

Tonight’s documentary chronicles the highs and lows of Ashley’s life, from model, dancer and pioneer for transgender equality. Whether you’re familiar with Ashley’s story or not, one thing’s for certain: after watching this documentary, you’ll be left in awe of Ashley’s life and legacy.

“Fashion reminds me that I’m free”: 9 LGBTQ+ people on what fashion and self-expression means to them

Ashley passed away in 2021 at the age of 86. She has since been hailed as a “trans trailblazer”, not least because of her incredibly moving story.

Born into a working-class family in Liverpool, she was one of nine siblings. She went on to join the merchant navy as a teen but after multiple suicide attempts, was placed ashore and in a psychiatric unit before moving to London and then on to Paris.

Once back in the UK, she obtained a driving license and passport that identified her as female and she went on to be photographed for Vogue and even had a small role in The Road To Hong Kong alongside Bing Crosby and Joan Collins.

April Ashley was awarded an MBE in 2012 for her campaigning work for the transgender community.

The cast of Heartstopper shut down anti-LGBTQ+ protesters at the London Pride parade, and it was everything

But her career was sadly cut short when, in 1961, she was outed as transgender by the Sunday People newspaper. It wasn’t widely known at the time that she was transgender, but what ensued was a media spectacle and scandal and it led to Ashley quickly becoming the centre of unwanted attention. She even had her The Road To Hong Kong film credit dropped.

She went on to marry aristocrat Arthur Cameron Corbett in 1963, but the marriage ended in divorce in 1970. Subsequently, the divorce proceedings garnered even more attention because they led to a landmark legal ruling in the case known as Corbett v Corbett. The judge annulled their marriage, ruling Ashley as a biological man and therefore deeming the marriage invalid.

The Extraordinary Life Of April Ashley airs on Channel 4 tonight.

It was a humiliating time for Ashley, but she went on to open a Knightsbridge restaurant. However, she later had a heart attack in 1975, which led her to move to the US. In 2005, she was legally recognised as female in light of the Gender Recognition Act, and in 2012, Ashley was made an MBE for her campaigning work for the transgender community.

The Channel 4 documentary not only tells Ashley’s story but also includes interviews with a stellar cast of contributors. As the synopsis reads: “The film will take the audience inside the intimate reality of the transgender experience, and explore how this celebrated trailblazer paved the way for future generations of transgender people.”

The Extraordinary Life Of April Ashley airs tonight on Channel 4 at 10pm and will be available to watch on All4 afterwards.