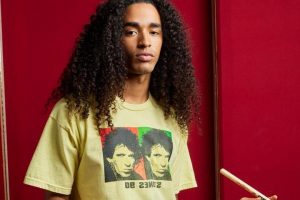 Rock and roll has been vital in the development of British fashion. For example, the major connection between the Sex Pistols and British designer Vivienne Westwood curated London’s punk scene and has continued to be the foundation that carries it today — seen most recently with Richard Quinn and Tommy Hilfiger’s collaboration — with its ragged T-shirts, bondage pants, and faded graphics of the Queen. Another band that has influenced British fashion is The Rolling Stones. When the five-piece band hit the big time back in the ’60s, the group was best known for its slouched sweaters, rumpled jackets, and ill-fitting trousers, and now the band’s flagship store on London’s Carnaby Street is showing its evolution with its Fall/Winter 2022 collection.

The new Rolling Stones collection is a celebration of the band’s 60th anniversary and is a modern take on sporty silhouettes and traditional uniforms that were the must-haves for rock and roll acceptance. By blending heritage patterns with a variety of bold hues, the classic Rolling Stones tongue motif has evolved with tweed patterns and shiny polish across knitwear designs and jersey.

The main collection theme for FW22 is the Lion from the Bridges to Babylon tour with garment designs featuring the reinterpreted tour logo across a knitted jumper and the stand-out sweater vest. Other collection highlights include a varsity jacket that features classic Stones branding across a modernized and oversized silhouette. A 1970s-style blazer rounds off the collection, featuring “Security” typography with sprinkles of red coloring that nods to the youthful optimism and creativity of Britain in the ’80s and ’90s.

You can have a closer look at the latest Rolling Stones collection above and it is available exclusively at The Rolling Stones global flagship store at 9 Carnaby Street.