Home » Entertainment » The ‘Solar Opposites’ Creators Apologize for Their Clairvoyance

The ‘Solar Opposites’ Creators Apologize for Their Clairvoyance 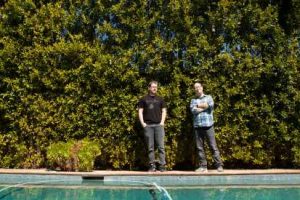 Half of them hate it, half of them love it. But nobody knows more about American pop culture than the aliens in “Solar Opposites,” who have crash-landed in suburbia and absorbed the culture as voraciously as Daryl Hannah’s TV-addicted mermaid in “Splash.” Justin Roiland, who created the animated series for Hulu with Mike McMahan, believes he would do the same thing if he found himself on their home, on the utopian planet of Shlorp.

“I would be up all night watching their TV,” Roiland said in a group video call earlier this month. “I’d know more than they did about their own stupid movies and culture and pop culture. It makes sense that these aliens would just have this insane list of like all these stupid things that they’ve watched.”

That level of pop obsession carries over from their work on “Rick and Morty,” the Adult Swim hit Roiland created with Dan Harmon, for which he also voiced both title characters. McMahan wrote scripts for all four seasons of that show, and the two seem to anticipate a self-awareness from their audience that allows their creations to speak in winking shorthand. Terry (voiced by Thomas Middleditch), a frog-mouthed connoisseur of trash art and junk food, often refers to his makeshift Shlorpian family as “the solar opposites,” as if he knows they’re in a TV show. (A lot of jokes come at Hulu’s expense, too.) Korvo (Roiland), his sour egghead counterpart, is able to “sci-fi” his way in and out of sticky situations with an endless supply of high-tech, plot-resolving gizmos. 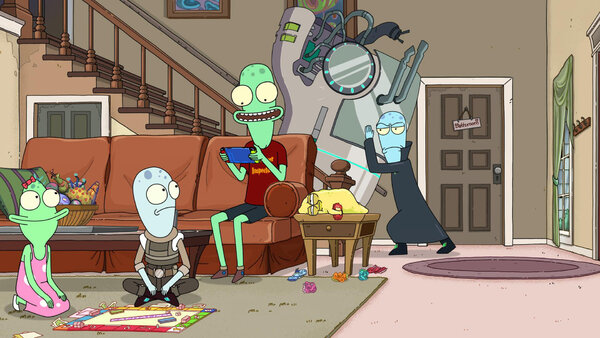 Among the gizmos deployed in the eight-episode second season, which arrives in full on Friday, is a “Lake House” device: a mailbox that sends messages back and forth from separate points in time, a reference to the high-concept 2006 romance of the same name starring Sandra Bullock and Keanu Reeves. Then there’s a single-use gun that converts a natural landscape into thriving urban center, with one hilariously grisly twist.

Roiland and McMahan’s penchant for pocket universes continues this season with more intrigue inside “the Wall,” a terrarium that the high school misanthrope Yumyulack (Sean Giambrone), Korvo’s “replicant,” has filled with the miniaturized bodies of people he dislikes. As Yumyulack and Jesse (Mary Mack), Terry’s cheery replicant, go obliviously about their teenage lives, the miniature society of the Wall evolves behind them, as the former resistance hero Tim (Andy Daly) becomes the new lord of the flies — or, perhaps, the terror of tiny town.

Speaking from their home offices in Los Angeles, Roiland and McMahan talked about their own love-hate relationship with pop culture, how the show fiddles with sitcom and sci-fi conventions and where the real world intersected with the sandbox society of the Wall. These are edited excerpts from the conversation. (The conversation took place before accusations of sexual misconduct against Middleditch were reported by the Los Angeles Times; Hulu declined to comment on the accusations.)

“Solar Opposites” is a situation comedy. There’s a family in a house. There’s an odd couple at the center of it. It has a fish-out-of-water quality to it. How do you see the show fitting into that tradition?

JUSTIN ROILAND: There’s something really fun and whimsical about these characters and the fact we’re putting them in a sitcom-y world allows us to do some of the insane [expletive] we want to do that we’ve never seen in that framework.

McMAHAN: At the same time, when we do switch into sitcom mode, we want our family to feel like a family. Terry and Korvo love each other, and they love the replicants, and they love the family that they’re in. And so we have these emotional stories we’re telling, and then [expletive] goes off the rails all the time.

As for that science-fiction part of the show, the characters here often use the term “sci-fi” to explain whatever gadget they might be using to get out of scrapes. How do you see “Solar Opposites” fitting into that tradition?

McMAHAN: That’s something Justin and Dan [Harmon] really created with the pilot of “Rick and Morty” because Rick is able to call things out and be like, “Look, this is just some sci-fi [expletive] we’re dealing with today.” It’s a very Rick sentiment. And then once we’d worked on “Rick and Morty” for a number of seasons, it just felt good. There were some things in “Solar Opposites” that felt like they were conventions we could just do away with.

One of them was, we didn’t want to do a show where a human on the street would be like, “Ahhh, an alien!” It was more interesting to us to have everybody be fine with it.

ROILAND: I think for me it’s important not to get caught up in the silly gun and how does it work, you know what I mean? It’s more about the emotional core of the characters and what are they going through. What are these characters feeling? How do I relate to them? It doesn’t matter that somebody got a schmoogie schmoogun, and what does it do?

McMAHAN: We get freed up to get to have fun and make more jokes when you’re tracking what the characters want, as opposed to how the tech works. And at the same time, we were like, “Let’s lean into the absurdity of sci-fi.” It’s like how Doctor Who’s Tardis can be bigger on the inside than on the outside. You go, “Ah, it’s sci-fi stuff. It’s a static work bubble or whatever …”

McMAHAN: “Look at this magic.”

McMAHAN: Whenever we need it for jokes, [the aliens] can open up a panel on the ship and be like, “Oh, here’s the gun that turns you into an elephant for this episode.” Because the point of the sci-fi isn’t, “Wow. We’ve really gamed out that somebody will one day be able to make an elephant gun.” It’s more, would it be wrong to use this elephant gun in this situation?

ROILAND: Yeah, absolutely. There’s so much stuff to love and hate. To me, it’s funny that these aliens know more about [expletive] than I do even.

McMAHAN: We’re both kids of the ’80s. We both grew up just loving TV and comics and video games and toys, and just the packaging and food that you have to cook in the microwave, and oatmeal that you can put sugar dinosaur eggs in.

ROILAND: But at the same time, we know we’re self-hating consumers. We know that that’s bad for the environment and we have to do better. And it’s important to us that we leave the world a better place than we found it. And that’s hard when we also want toys.

I wouldn’t describe “Solar Opposites” as a terribly political show, but do you see the Wall as a way to kind of comment on how societies are built? Are there opportunities that this “Lord of the Flies” situation has given you?

McMAHAN: Absolutely. From the pitch, that’s what it was.

ROILAND: Let’s just be honest. Let’s get it out there, I was playing that … what was that game?

McMAHAN: There’s iOS games where you control little worlds, and you have to manage the food.

ROILAND: And they had just announced it at E3 [an annual gaming expo], and they’re like, “And it’s free and it’s available right now.” So I downloaded it. This is around the time we were developing the show and I’m playing it and I was like: “Oh my God, wouldn’t it be fun to just have these kids shrinking humans? And then let’s just play with society.”

What would a small town look like in the wall of these kids’ room? How would they form law? Because at that point it’s like: “Hey, we’re not in America anymore. We’re not in anywhere on Earth. We’re in our own ecosystem. We make the law. We make the rules.” And it’s sort of like how a pod in a prison might work. You know what I mean? It’s like: “Who knows if the strongest are going to be the ones making the law? Or the most intelligent?”

But anyway, yes, it’s very fascinating to play around in that sandbox because humans are very interesting and society is interesting. How did we end up where we are now? It’s ridiculous. And when is it going to collapse? Tomorrow? A couple of days from now?

McMAHAN: When we started writing “Solar Opposites,” we weren’t paying attention to politics. This was pre-2016. This was before I knew the name of everybody in the cabinet and who the secretary of the Treasury is, and I think we’re all, maybe against our own best wishes, our own wishes, more political than we used to be. And what we originally were trying to build in the Wall is, we wanted something that felt comfortably serialized in a mythologically broad and storytelling way — where you understand that when communities are created in a crisis that heroes and villains rise. We grew up seeing stories like that. You see that with, like, you said, “Lord of the Flies.” I would say, “Under the Dome” or “Escape From New York.” It’s a very sci-fi sort of sensibility.

ROILAND: It was so funny to Trojan horse that dramatic human story into this crazy comedy.

McMAHAN: Sorry we accurately predicted this weird proto-fascist era with our Wall story. That was our bad.