Home » Entertainment » The Soulful 11-Year-Old Princes of ‘The Nutcracker’

The Soulful 11-Year-Old Princes of ‘The Nutcracker’

You just can’t take the boy out of a “Nutcracker” Prince. Not even one as regal as Tenzin Niles.

At a recent battle scene rehearsal for “George Balanchine’s The Nutcracker,” Tenzin, lying stiffly on his back, stifled a giggle as Ines Gout — the Marie to his Prince — ran her hands above his supine form. She never touched him, but he had the look of a boy being tickled.

Moments later, he commanded his toy soldiers to fight an army of mice led by the Mouse King, the equally elegant New York City Ballet dancer Silas Farley. Tenzin, wielding a sword, ran across the studio and leapt onto Mr. Farley’s back without a shred of fear or an inkling of hesitation. It was pure glee. 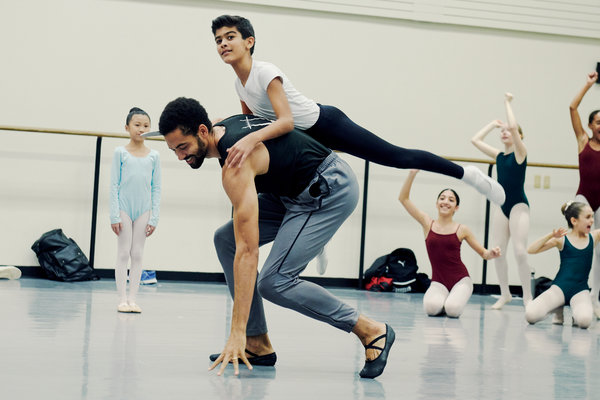 One reason City Ballet’s 1954 production of “George Balanchine’s The Nutcracker” remains enchanting has to do with the delightful children who appear in it: 126 students, ages 8 to 12, from the City Ballet-affiliated School of American Ballet are participating this year.

[Read our story about the two young ballerinas who danced Marie last year.]

They all carry their share of responsibility but the Prince is critical. This season, two 11-year-olds alternate in the part: Tenzin, who performed it last year, and Athan Sporek, who makes his debut opposite Fiona Daly’s Marie.

Athan said he was surprised to get the role, but also thought there might be a chance: “I was the right height.”

Ballet is a family tradition for Athan, whose mother, Matina Simegiatos, attended the School of American Ballet and performed in “The Nutcracker.” But Athan is more than a ballet dancer; at 7, he made his debut as the youngest Gavroche in Broadway history in “Les Misérables.” He also starred in “A Bronx Tale” on Broadway. “If I could,” he said, “I would want to peform my whole entire life.”

Tenzin, who is of Indian descent, trained in that country’s classical form of Bharatanatyam before switching over entirely to ballet last year. “It’s more on your heels,” he said of Bharatanatyam. “Ballet is more on your toes. But it helped me in the Prince’s pantomime because you have to use all the facial expressions.”

[Watch Tenzin walk us through the Prince’s pantomime last year.]

A life in the performing arts isn’t not for everyone. Tenzin and Athan hustle through days packed with school, ballet class, “Nutcracker” rehearsals — which began in September — and, now, performances at the David H. Koch Theater (through Dec. 30).

Just getting there can be a huge grind. This year, Tenzin’s parents are allowing him to ride the subway alone, as long as it isn’t too late. He lives in Lower Manhattan and attends school in the West Village. Athan, who lives in Bay Ridge, Brooklyn, and attends a performing arts school in Coney Island and travels by car; much of the driving is done by his great-aunt.

What’s most delightful about the Princes this year is how different they are. Athan is sprightly — his luminous eyes dart and flutter like butterflies. And Tenzin, who has a dry sense of humor, is Zen-like — it seems like no accident that he was named after the Dalai Lama.

Dena Abergel, the children’s ballet master at City Ballet, said that Tenzin’s lyrical, princely quality was obvious from the start.

“What was always obviously princely about him was his bearing and his movement quality,” she said. “But what was harder to bring out in him was the sharpness and the boldness, and now it’s there.”

And the disarming, mop-haired Athan, who played Fritz in 2015, is a natural performer. “He doesn’t have that calm that Tenzin has, but the energy is so great,” Ms. Abergel said. “Onstage, his talent is in his innate creativity in movement. He has an ability to really go with an instinct.”

A lot goes into casting the role. Size, for one. Will the boys fit the costume? Also, Ms. Abergel said, focus and learning are important. The ballet masters need to know “that the kid is not going to freak out on the stage,” she said. “It is so much material.”

But you get the feeling that these two won’t crumble under pressure. What follows is an edited conversation with the princely pair, who were captured by the photographer Vincent Tullo as they went about their lives in the days leading up to the first performances.

Why did you start studying ballet?

Tenzin Niles I need to move my body always. So I went to a classical Indian dance class and I really loved it, but I wanted more, so my dad signed me up for ballet. It was a small studio and they were learning a dance from “Frozen” and the teacher just gave me a part the day I got there.

Oh, to be a boy in ballet … What about you, Athan?

Athan Sporek My grandmother used to show me videos of [Mikhail] Baryshnikov. I was really obsessed with how high he jumped and how many turns he could do. My grandmother was like: “You should go and train. You could be as good as him.” I thought it was impossible, but it was worth a shot.

Do you get picked on being a boy in ballet?

Tenzin I thought I would. A lot of my friends come and see me in “The Nutcracker,” and they see that ballet isn’t just little girls in tutus twirling around. It’s a very serious art form. So I think a lot of them respect what I do.

Athan I haven’t gotten picked on for being a boy dancer. It really helps that I go to a performing arts school and everyone’s linked in the arts.

Tenzin, what is it like returning to the part of the Prince?

Tenzin Last year, I focused on getting everything right, and this year I’m working on bringing my own personality to the role. I’m a different person now.

How are you a different person?

Tenzin I didn’t really feel a difference when I went from 9 to 10. When you’re 10 and 11, you have more responsibility. I go on the train alone this year, so I’m very independent and that has changed the role. It’s sort of hard to explain.

Athan, what are you trying to capture as a first-timer?

Athan It takes a lot of presence. So that’s what I’m going to try to bring to the stage. Posture. Head gestures and movements and making everything very big and open. The pantomime is probably one of my favorite parts of the Prince role. It’s challenging when you’re telling the story. The battle scene is a big fight, so going from being very gentle and soft to very sharp. It’s hard to go from a gentle motion to a stiff one.

In the battle scene, you wear the Nutcracker head. How does that feel?

Tenzin You can’t really see anything out of those little eyes. You can see the people that are right next to you, but you have to be really aware of where you are on the stage. Nothing bad ever happens, but there’s a scary feeling.

In rehearsals, we do these big marches but in the costume, it’s sort of hard to get your leg up.

Athan, you’ve performed on Broadway and in films. How important is ballet in your life?

Athan I want to be strictly ballet for this period of time. My passion has been stronger than ever this year for ballet. I’m just going with my gut.

Why do your think your passion has grown?

Athan Like Tenzin said, 10 to 11 is a big change. I feel like I want to push and become a better kind of version of myself and ballet could really help with that because of all of the training and hard work.

Tenzin I think ballet is the root to everything. Once you do ballet there are so many possibilities. I could become the greatest teacher in the world because of the stuff I learned in ballet. It might not even be ballet — I might be a history professor, because of what I learned at S.A.B.

Athan Because it doesn’t just teach ballet movement. It really gets deep in your soul and makes you touch something that you wouldn’t be able to do without ballet.

Tenzin said he really wants Trevor Noah to come see him dance. Athan, who is your dream audience member?

Athan Since I’ve always looked up to Baryshnikov, I want him to come see it really badly.

Tenzin Yeah. That would be crazy. Or if George Balanchine could rise up from his grave and watch me? I would love that.