The Surprising Tale of One of Frank Stella’s Black Paintings

At 82, the artist Frank Stella has done it all and isn’t terribly concerned what anyone thinks. He is matter-of-fact and unguarded, secure on his perch in the pantheon after two solo retrospectives at the Museum of Modern Art. He can — and did — wear white house-slippers to an interview and photo shoot. Deal with it.

Mr. Stella became art-famous not long after graduating from Princeton in 1958, and he has been lauded for achievements like his early Black Paintings, with their dazzling geometric rigor and their power to inspire statements like his “What you see is what you see.”

His work evolved over the decades — the brightly colored Protractor series became a landmark of contemporary art, too, and eventually his work got sculptural and very big. His studio is now in the Hudson Valley, where he goes often to make pieces that require a lot of space, like “adjoeman” (2004), a stainless steel and carbon fiber sculpture weighing some 3,000 pounds that was once featured on the roof of the Metropolitan Museum of Art.

But he and his wife, Harriet McGurk, a pediatrician, live in the same three-story house in Greenwich Village that he acquired in the late 1960s.

It’s packed with art — there are many large, midcentury abstractions by friends, peers and those he admired when he started, including Jules Olitski, Hans Hoffman and Kenneth Noland. But there’s also a seascape by the 19th-century painter Eugène Boudin hanging over a landscape by the Fauve artist Henri-Edmond Cross. An early, figural Mondrian hangs in a hall. 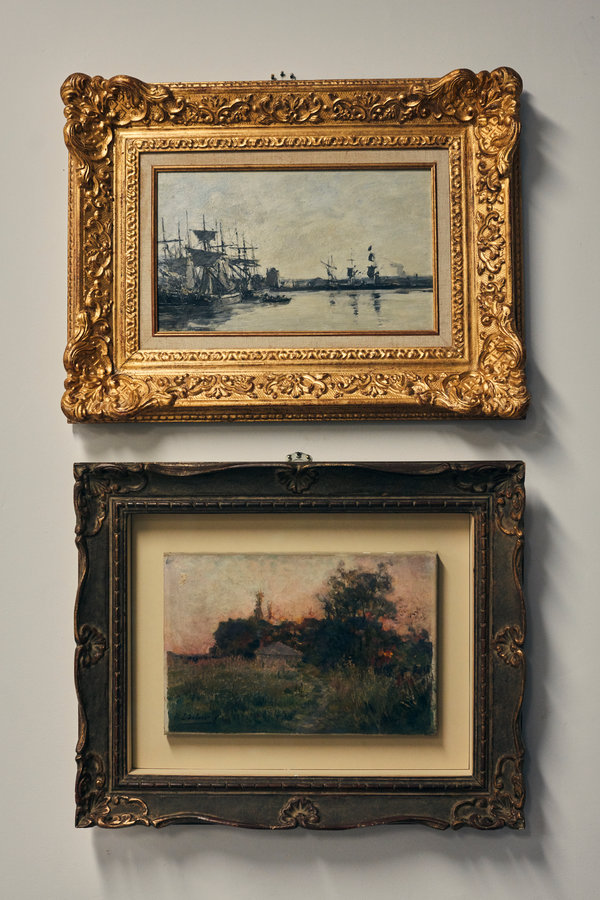 Mr. Stella has decidedly catholic taste in art, further evidenced by the works he is selling at Christie’s, including an untitled 1927 Miró oil being auctioned in London on Feb. 27 and David Hockney’s “A Less Realistic Still Life” (1965), up for auction on March 6. In New York in May he is selling a double portrait of a couple by the Dutch painter Jan Sanders van Hemessen (1532); two of his own works, “WWRL” (1967) and “Lettre sur les Aveugles I” (1974); and Helen Frankenthaler’s “The Beach Horse” (1959). Estimates for those works range from $1.5 million to $7.5 million.

Why sell? “It’s nice to have some liquidity,” Mr. Stella said. “You don’t want to save everything for the end. I won’t be around forever.”

Explaining the works he has amassed, Mr. Stella said, “Artists collect differently from other people,” an idea he elaborated on in a chat. These are edited excerpts from the conversation.

Let’s start with the living room: big colorful abstractions by your generational peers. Why?

I like all of the art that I grew up with. I wouldn’t bother making art if I didn’t like what the people around me were doing, too. It wouldn’t be any fun.

There’s nothing by you in this main space.

You’re the only artist I’ve ever met who displays fakes of their own work.

I only own four fakes. Some people are naïve enough to say, “Will you authenticate this work?” [laughs] And then we don’t send them back when they’re fake. They’re serious, these guys making them; they know what they’re doing.

There’s a painterly quality to everything on display here.

Take the Jack Youngerman for example [“Aztec III” (1959)]. Artists see each other’s work, and they recognize the touch. The way your hand moves, you can see Jack in the brush there, and you can see the same thing in the Olitski [“Hot Ticket” (1964)]. You know how the paint goes into the canvas. You can see how it builds the work.

One piece you’re selling is by Helen Frankenthaler. She was only a bit older than you, but she was already famous when you arrived on the scene.

I always loved Helen’s work and everything about her. And the most interesting part of our tiny “relationship” was she once offered to exchange art, for one of her smaller ’58 paintings.

And you said yes, of course?

It was so off-putting, with Helen and with Bob [Robert Motherwell, her husband then] in their apartment, I couldn’t bear to exchange because it didn’t feel to me that there was anything I could offer that would be equal. I was just intimidated. And then I bought this painting from a dealer because it was a ’59 painting, from that period.

I think a lot of people would be surprised that you have collected old masters.

The van Hemessen, I just saw it in a catalog in the ’80s. The part I couldn’t resist is that it’s from 1532. The idea of having a Northern Renaissance painting in your house!

Any other auction adventures?

Around the time I bought that, there was another Dutch Renaissance picture by Pieter Aertsen. It was estimated at $300,000 or $400,000 in a sale in Amsterdam, and I was alone in my hotel room in London. I don’t know how much I had to drink or whatever. But anyway, I picked up the phone and I started bidding.

What was appealing about the Miró?

It’s a beautiful little picture. If you think about things, basically it’s Picasso, Matisse and Miró — that’s one side of the coin; and the other side is Kandinsky, Mondrian and Malevich.

The coin of 20th-century art. It’s the heart of modernism. There’s a relatively figurative side and there’s a totally abstract side.

And we know what side you’re on.

Well, I ended up on the abstract side. But my mother was a figurative painter, actually.

Did growing up with that influence you?

When I was 10 or 12 years old I worked with my father on painting our summer house — outside and inside. And when I came to New York, I could tell right way that de Kooning had been a house painter.

Jeez, you can’t miss the brush stroke. It’s a four-inch brush. By the time I came here, making art with paint was not anything tricky to me. And it must be like that to people who are musicians when they can just hear something, you know?

Is it safe to say that you have a lot of your work tucked away?

There is a large collection, but it’s in my studio. People fantasize about that sometimes, but you have to remember that it consists of work that I wasn’t able to sell. [laughs]

I think people fantasize that there’s an extra Black Painting tucked away.

Once, when I was moving from my studio on West Broadway and I had to carry things down to Walker Street, I had a painting in a cart that I was pushing, and the painting kept falling off — a Black Painting, rolled up. I just bent it in half and stuck it in the trash basket on the corner of West Broadway and Canal.

Wait, are you serious? Somebody could’ve just found a Black Painting one day?