The T List: Five Things We Recommend This Week 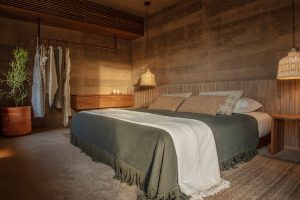 Welcome to the T List, a newsletter from the editors of T Magazine. Each week, we’re sharing things we’re eating, wearing, listening to or coveting now. Sign up here to find us in your inbox every Wednesday. You can always reach us at [email protected].

A Bohemian Hotel Set to Open in Baja, Mexico 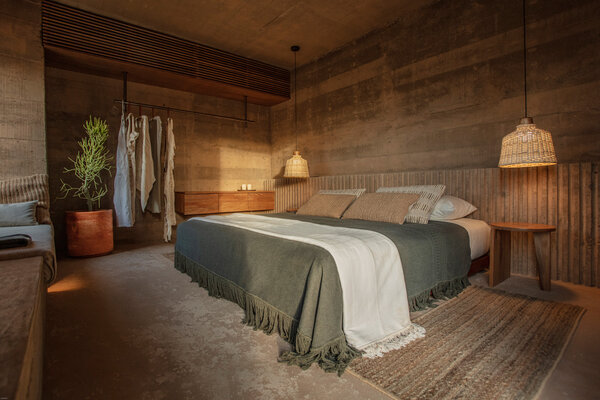 Todos Santos, on the southwestern coast of Baja California in Mexico, sounds like one of those bohemian fairy-tale towns: Home to local farmers and Californian expats who came for the surfing, it’s situated at the intersection of the desert, the ocean and the mountains. Which is why, when the Mexico City-based business partners Pablo Carmona and Josh Kremer decided to build a hotel there — Paradero Todos Santos, set to open in January — they were determined to create something that would exist in harmony with the community and natural beauty. After looking at over 100 different properties, they landed on a nearly five-and-a-half-acre plot nestled between two peaks, upon which they constructed — with the help of the Mexican-Swiss architecture firm Yektajo & Valdez — a low-slung, minimalist lodging made of beige concrete and accented with Tornillo timber. The 35 bedrooms have white cedar-wood furniture and blue and green textiles woven by artisans in Oaxaca, as well as indoor-outdoor rain showers and, in some cases, hammocks. At the edge of the property is a half-moon-shaped pool area that looks out onto a forest of cactuses, and the hotel restaurant, which relies in part on ingredients sourced from its own organic garden, might on any given night offer zarandeado fish, battered and grilled over the kitchen’s traditional Oaxacan stove and served with pinto beans and hand-pressed tortillas; or fresh shellfish (chocolate clams, kumai oysters) served over ice with homemade habanero sauce. Guests can also embark on a fishing expedition of their own (Jesús Parrilla, the former C.E.O. of the experiential travel company Explora, is advising on the project), or enjoy a food tour, yoga on paddle boards, a hike through sand dunes or, of course, a surfing lesson. Rooms from $550, paraderohotels.com.

Designer Strawberries Delivered to Your Home

Recently, a slender plastic tray of Japanese strawberries otherwise known as the Omakase Berries arrived at my door. I could smell them first. They were firm and large, with minuscule seeds, and each bite I took was packed with a candylike flavor, at once sweet and fruity, leaving just the lightest bit of tartness on my tongue. Originally from Japan, Oishii’s Omakase Berries are a newish arrival to America; they are now being grown — at chilly temperatures made to mimic the climate of the Japanese Alps — in vertical indoor farms in New Jersey, and are available not just to chefs in the area (Manhattan restaurants such as Atomix and Sushi Ginza Onodera feature the berry on their menus) but to laymen berry lovers as well. They are certainly more delicious than what I normally pick up at the supermarket around the corner, and there is an undeniable pleasure to be had in carefully eating near-perfect fruit (I am reminded of Louis XIV’s great love for orange trees). For those of us about to hunker down for a long, isolated winter, these berries might just be what you need to brighten not only your palate but your day. Available for delivery in select regions in New York, $50; oishiiberry.com.

Artist Plates to Benefit the Homeless

When the pandemic hit — bringing with it a wave of job losses and evictions — the Coalition for the Homeless found itself having to serve around 400 more free meals per night to New Yorkers in need, according to the organization’s executive director, David Giffen. At the same time, the nonprofit found itself unable to host its annual gala and art auction because of social distancing guidelines. Yet crisis begets creativity, and the coalition devised another way to raise money for its cause. This week, it is releasing, in collaboration with 50 contemporary artists, a series of limited-edition porcelain plates to be sold online. Contributors include Jenny Holzer, Maurizio Cattelan, Carmen Herrera, Ed Ruscha and Rashid Johnson, among many other recognizable names. Johnson, who documented homeless Black men in his 1999 photographic series “Seeing in the Dark,” says he felt an urgency to respond to the crisis. And, as Giffen says, “What better symbol is there of serving, of nourishing, of helping somebody than a plate?” Indeed, each sale will allow the coalition to feed exactly 75 people. $175 each; the Coalition for the Homeless’ Artist Plate Project will be available for sale until Dec. 15; coalitionforthehomeless.org.

For as long as I can remember, I’ve marked the onset of fall by looking for the perfect sweater. And while I invariably end up with a handsome navy, gray or black V-neck, this year, I was determined to break out of my comfort zone and inject some color and pattern into my wardrobe. Three brands particularly caught my eye on account of their more personal-feeling knitwear. Leret Leret was founded last year by the siblings Edouard and Andrea Leret, who focus on a single style: a classic crew neck made from Mongolian cashmere. They release limited-edition capsules a few times a year that feature the garment in different colors or adorned with various graphics. Priya Ahluwalia, meanwhile, launched her namesake men’s wear brand in 2018. She borrows design elements from her Indian-Nigerian heritage, using vintage and dead-stock clothing and her signature patchwork technique to create new celebrations of color, as evidenced by her vibrant knits. Finally, Joost Jansen, the founder of the Dutch brand Survival of the Fashionest, aims to preserve traditional craftsmanship by working with European knitters to produce whimsical handmade pieces of 100 percent Irish Donegal wool that take approximately three weeks to create. Who says we have to keep warm quietly?

As the creative director of the luxury Parisian men’s wear brand Berluti, Kris Van Assche believes that, despite how digital we are these days, handicraft has only become more relevant, not least because, by its very nature, it requires a human touch. His latest project — and the brand’s first foray into housewares following a collection of restored Pierre Jeanneret furniture it released in collaboration with the art dealer François Laffanour last year — very much puts craft at its center. Intended as a selection of essential items for the home and office, this new collection consists of reimagined editions of well-known pieces designed by some of Europe’s most respected makers over the last 70 years, now embellished with Berluti’s trademark Venezia leather. These include an elegant magazine rack with a cast-brass frame by the Austrian modernist Carl Auböck II, and a trio of bowls by the Italian postmodernist architect-designer couple Afra and Tobia Scarpa, along with the silversmiths at San Lorenzo, the forms of which recall sheets of paper that have been lightly crumpled. Van Assche also commissioned entirely new pieces, including a set of five sculptural vases in cuir bouilli (boiled leather) by the London designer Simon Hasan. The skillful leather work that unites the pieces is colored using Berluti’s traditional (and closely guarded) patination technique but, less traditionally, in an array of zingy jewel tones, from emerald green to amethyst purple to ruby red. “The thing with craft is that it can easily end up being a little old-fashioned,” says Van Assche. “This collection is about respecting heritage while pushing it in new directions.” berluti.com.