Home » Entertainment » The T List: What to Wear, Read and Try This Week

The T List: What to Wear, Read and Try This Week

Welcome to the T List, a newsletter from the editors of T Magazine. Each week, we’re sharing things we’re eating, wearing, listening to or coveting now. We hope you’ll join us for the ride. (Sign up here, if you haven’t already, and you can reach us at [email protected].) 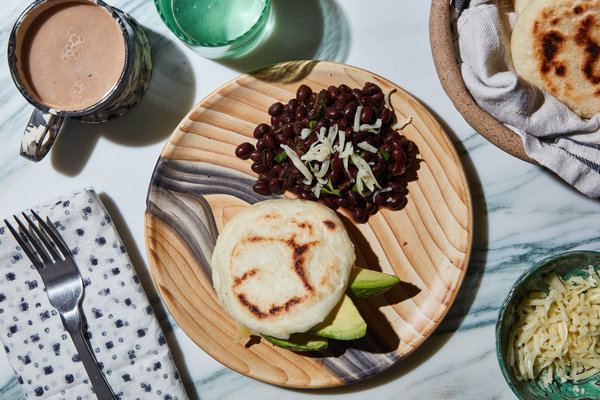 The Venezuelan performing artist Migguel Anggelo, 46, grew up two hours outside Caracas, on his family’s farm, where cows grazed and oranges ripened on a landscape surrounded by beaches and mountains. As a young man, he learned to sing, dance, act, paint and play guitar, and since moving to the United States in 2002, he has released two albums and written a number of pieces for the stage. His current work, a musical one-man show called “LatinXoxo,” runs through the end of this month at Joe’s Pub in New York and addresses his relationship with his homophobic father; by turns Anggelo plays the Virgin Mary, Carmen from Bizet’s canonical 1875 opera and a toreador. While performing is one way Anggelo reckons with his Venezuelan past, he also does so by making Venezuelan arepas several times a week. In his country, the portable, starchy pockets typically come stuffed with eggs, meat, beans and cheese, though pretty much anything goes. Still, while there are any number of ways to fill an arepa, there’s only one way to eat it: “with your hands,” Anggelo says emphatically. For Anggelo’s recipe, visit tmagazine.com.

Fifty Years of America, Captured by One Photographer

For the past half-century, Mitch Epstein has watched America change through a camera viewfinder. He took his first pictures in 1969, at age 16, and remembers the freedom afforded to photographers in the 1970s and ’80s: “We were pre-surveillance, predigital and without Homeland Security,” he wrote to me in an email. “In general, the public was less self-conscious and less suspicious of someone with a camera in their hand.” Now, he said, fresh ways to capture the country are hard to come by — unless, like Epstein, you know where, and how, to look. His new monograph, “Sunshine Hotel,” offers 175 such snapshots of America, from black-and-white crowd shots at Mardi Gras in the mid ’70s to a photograph of Ivana Trump surrounded by cheerleaders at Trump Tower in 1984 to a poignant image of a prayer walk through the Standing Rock Sioux Reservation, taken last year. Arranged out of chronological order by the editor Andrew Roth, the photos portray an artist with abiding curiosity, able to see both the personal and the political. $75, artbook.com.

The Easy Hat-Resistant Hairstyle of the Season

With cooler temperatures finally setting in, I’ve officially restarted my war against hat hair. Braids have been my go-to hairstyle in seasons past but, this year, low ponytails with a deep side part appeared again and again on runways. I emailed with Guido Palau, the hairstylist behind some of these looks, who described the hair at Longchamp as sporty and feminine, and the tresses at Loewe as polished and a little boyish. Fortunately, the classic style is easy to achieve: Palau suggests parting strands to the side and blow-drying using Redken’s Extreme Play Safe, then gathering the hair into a low ponytail, using your hands instead of a brush to leave slight imperfections. For extra shine, you can run R&Co’s Two Way Mirror smoothing oil through the hair before tying it back, or mist Redken’s Shine Flash 02 once you finish. I’ll be wearing this hairstyle all winter long, both on my snowy commute and to holiday parties.

In need of some advice? For T’s new Culture Therapist column, we solve your problems using art. Email us at [email protected]

Aprons, but Make It Fashion

Growing up in Portland, Ore., I loved watching my mother cook Korean recipes passed down through her family, like kimchi stew and slow–braised oxtail soup. Now, I try to follow her scribbled directions and find cooking (and watching cooking videos on YouTube) very therapeutic. And as a fashion editor, I can’t help but dress the part — even when in the kitchen. I’ve had my eye on these beautiful aprons from La DoubleJ, made from quality Italian fabrics and in a handful of eclectic prints that would pop against any of the dresses from the brand’s ready-to-wear line. If you’re more of a minimalist, the home-goods brand Minna, based in Hudson, N.Y., also has a nice apron selection, all ethically made by pedal-loom weavers in Zinacantán, Mexico. Or this indigo waist apron from the Portland, Ore.-based store Kiriko Made, cut from traditional Japanese fabric, is another beautiful option. Any of these would also be a thoughtful gift for a dinner host this holiday season.

A Scented Candle Unlike the Others

It seems as if, in the past year or two, the scented candle market has become oversaturated. Aside from the countless fragrances to choose from, there’s the packaging to consider, too. On a recent shopping trip to 180 the Store in TriBeCa, an earthy and smoky, yet slightly citrusy aroma pulled me away from the fall jackets and toward the home section; at its source was the Hakudo x Hasami candle from the olfactory design brand Aoiro, which blends 11 different botanical essences from plants like hiba, vetiver and yuzu to create the scent. Each candle is hand-poured into a porcelain container that has been fired in the atelier of a master craftsman in the town of Hasami in Nagasaki, and then dipped in a manganese glaze lending it a unique metallic sheen. Once the candle wax is melted, the container takes on a second life as a yunomi, the handleless teacup used daily in Japan — an added bonus. About $145, aoiroair.com.

A Cozy, Minimalist Retreat Perched Among the Treetops