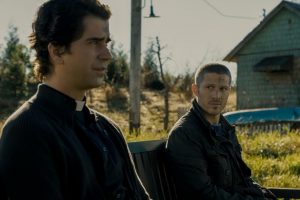 The Haunting Of Hill House creator Mike Flanagan is at it again with his new Netflix series.

Just in time for the approach of spooky season, Netflix has dropped the full-length trailer for its new thriller from the creator of The Haunting Of Hill House – and it’s giving us serious The Third Day vibes.

As previously reported by Stylist, Midnight Mass tells the story of the isolated community of Crockett Island, whose existing divisions are “amplified” by the arrival of two men – one, a disgraced former resident (Zach Gilford), and another a charismatic and mysterious priest called Father Paul (Hamish Linklater), whose appearance coincides with a series of unexplained and “seemingly miraculous events”.

And in the new trailer, we get a taste of what the arrival of these two figures could mean for the island and its residents (spoiler alert: it’s not good).

Midnight Mass: Netflix’s new thriller will have you hooked

Accompanied by a suitably creepy rendition of Keane’s Somewhere Only We Know, the trailer opens with an overhead shot of Crockett Island, before showing Riley Flynn (Gilford) arriving by boat. As he walks through the island’s tiny village, it’s clear that his arrival is a shock to the residents, who turn around to watch him and his mother as they walk past.

It’s not clear what exactly drove Flynn back to the island, but a conversation between him and his mother – which is accompanied by shots of what looks like a crime scene – suggests he caused harm in some way or another, and that he’s returned to the community to seek “help”.

Cue the arrival of Father Paul, who turns up unexpectedly to lead the island’s Church service.

Father Paul’s arrival coincides with a series of mysterious events.

“I know I’m not who you expected to see,” he tells the small congregation. “Just know I’m only here to help, and I look forward to meeting you all.”

However, as the trailer progresses, it’s clear things aren’t as rosy as they once were on Crockett Island. Bit by bit, the islanders are consumed by religious fervor, and strange things start to happen around the island, too.

Before long, it’s clear that things are going down a dangerous path. And as the trailer closes, we see chaos begin to descend on the community.

You can watch the full trailer below:

It’s a lot to take in, but this new trailer delivers just the kind of spine-tingling, unsettled vibe we hoped for from this new series.

If one thing’s for sure, we can’t wait to see what the full show has in store when it drops on Netflix on 24 September.