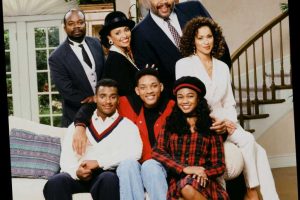 A new trailer teasing “The Fresh Prince of Bel-Air” reunion special means fans of the 1990s sitcom can now officially get excited to watch it.

Will Smith, who starred in the show, shared the trailer for the upcoming special on his Instagram account on Friday. The reunion is set to air on HBO Max on Nov. 19.

“These are the people who made me the man I am today,” Smith wrote in the caption for the post. “And I couldn’t let this day go by without marking the occasion.”

“I’ve always been able to recognize chemistry,” Smith says in the trailer.

“Fresh Prince” centered on Smith, whose high-school-aged character (who bears the same name) moved from West Philadelphia to live with his relatives in the wealthy Bel-Air neighborhood of Los Angeles.

The trailer features a dedication to James Avery, who played Philip Banks, aka Uncle Phil. Avery died in 2013.

“James is the heart of the show,” Ali said about the late actor in the clip.

The “Fresh Prince” cast first teased the reunion special back in September, which marked the 30th anniversary of the show’s debut.

Janet Hubert also makes an appearance in the trailer, after an introduction from Smith, who says, “I couldn’t celebrate 30 years of ‘Fresh Prince’ without Janet.”

Hubert originally played the character of Vivian Banks — or Aunt Viv — for the first three seasons of the show, before she was replaced by Reed. Since her departure, she has had a rocky relationship with some of the cast members, particularly Smith. In 2016, she publicly accused the “Bad Boys” actor of being “a part of the system that is unfair to other actors” amid the #OscarsSoWhite controversy.

Elsewhere in the trailer, Ali reflected on the impact of the show, which ran from 1990 to 1996: “Our show meant Black excellence.”

END_OF_DOCUMENT_TOKEN_TO_BE_REPLACED

END_OF_DOCUMENT_TOKEN_TO_BE_REPLACED
We and our partners use cookies on this site to improve our service, perform analytics, personalize advertising, measure advertising performance, and remember website preferences.Ok