The Unforgettable Theater Moments of 2018

We escaped to Margaritaville and made way for Glenda Jackson, got mad as hell all over again and learned to love a Malfoy. The year in theater had many riches and no shortage of surprise. Now that our chief critics have weighed in, it’s time for other New York Times writers and editors who spend lots of time in the dark to illuminate the moments that brought us joy and laughter, shock and awe. And the beat.

Any star gets entrance applause these days. Entrance yowls of terror? That’s trickier. But when the titular two-ton ape of “King Kong” — a marvel of puppetry, animatronics and some not exactly subtle sound, projection and lighting — blasted onto the Broadway stage, looking like he meant to eat the front mezzanine, it was a first impression for the ages. ALEXIS SOLOSKI

Rarely has a strut so completely embodied a character as Taylor Louderman’s in “Mean Girls.” Playing queen bee Regina George, Ms. Louderman swings her hips with bold confidence and aligns each foot exactly ahead of the other, as if she were walking on a tightrope. It’s like watching the second coming of Ann-Margret, and it’s exhilarating. ELISABETH VINCENTELLI

An “Oklahoma!” with same-sex lovers might seem to have “gimmick” written all over it. But in Bill Rauch’s transformative and important production at the Oregon Shakespeare Festival, any such worries melted away the instant that Curly (Tatiana Wechsler) made her exuberant entrance, as much fun to root for in romance as Ado Andy (Jonathan Luke Stevens) would turn out to be. LAURA COLLINS-HUGHES

Ewww! That’s the word Idina Menzel, making her first appearance in a straight play in years, might have uttered if she actually needed words to express her inner thoughts in Joshua Harmon’s comedy “Skintight.” After all, she was sitting down on the couch where her 70-year-old father’s 20-year-old boyfriend, clad only in a jockstrap, had just been perched. Remembering the sight of his bare butt, she blanched and leapt back up. It turns out there’s more than one way to hit those high notes. MICHAEL PAULSON

A devil with an angel’s face, the British actor and musician Johnny Flynn brought his floppy hair and pouty lips to Martin McDonagh’s midnight-black comedy “Hangmen.” A creature of fast talk and loose walk, his Peter Mooney was a menace, a creep and a maelstrom of pure charisma. A.S.

“We Got the Beat” opened the show with the requisite bang, and “Vacation” had its spot, too, but the real surprise in the underrated Go-Go’s jukebox musical “Head Over Heels” were two deep cuts: “Vision of Nowness” and, especially, “Automatic Rainy Day” — the latter powerbombed into my cranium in a duet by Bonnie Milligan and Taylor Iman Jones. SCOTT HELLER

In “Pass Over,” Antoinette Nwandu’s powerful contemporary reimagining of “Waiting for Godot,” a picnic basket contains a bottomless (and ridiculous) array of delicacies, from string beans to apple pie, goji berries to turkey legs, collard greens to dim sum. There is meaning, here, about the haves and have-nots, but there is also spectacle — watching a menacingly mild Gabriel Ebert extract the impossible bounty from a dainty basket was unexpected stagecraft that had to be seen to be believed. M.P.

The stage area in “Yerma” was encased in a glass box with no visible door or hinges. Even with the audience on two sides, it was impossible to tell how the set changes — which took place during brief blackouts — happened. Spoiler alert: The director Simon Stone gave away the trick to design magazine “Surface.” E.V. 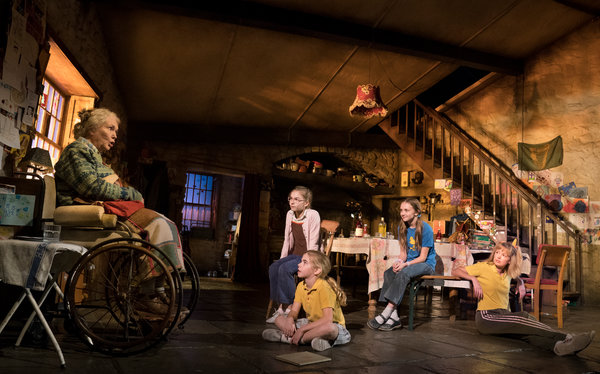 “The Ferryman” pulls many rabbits out of its sleeve, including literally. But the most magical moment might be when Aunt Maggie Far Away wakes from a near-vegetative state and holds the four young Carney daughters rapt with tales of lost love and predictions of their own futures. It’s a sweetly mystical glance both forwards and backward, whose dark oracular power only becomes clear in the play’s final seconds. JENNIFER SCHUESSLER

The talk-dirty-to-me monologue in Kate Tarker’s bizarro comedy “Thunderbodies,” at Soho Rep, was flamboyantly gross-out filthy, and the great Deirdre O’Connell wallowed magnificently in it, delivering a screamingly funny, revoltingly blue aria to a lover’s prowess with his nose. L.C.H.

Maybe I’m too open to suggestion. But I would swear that the Lyric Theater actually got cooler when the dementors — cloaked creatures that feed on human happiness — arrived in “Harry Potter and the Cursed Child.” Is the production actually lowering the temperature in the auditorium, or am I just feeling chills because I know dementors exude cold? I’ve never asked the question, because, to be honest, I’d rather treasure the thrill. M.P.

They are sisters who survived a fire set by their father, and hellbent on revenge. How to depict the brutally scarred Racine and Anaia in Aleshea Harris’s phantasmagorical “Is God Is.” Netting punctured and torn to make masks for the faces of the actresses Alfie Fuller and Dame-Jasmine Hughes — a simple, effective and enormously disturbing choice courtesy of the costume and makeup designers Montana Levi Blanco and Cookie Jordan. S.H.

“The King and I: From the London Palladium” captured, for the big screen, Bartlett Sher’s lushly gorgeous production. It also committed to film a wrenching moment in an actor’s life: Ruthie Ann Miles, re-creating her Tony Award-winning performance as Lady Thiang with ferocious command and, as she healed from a devastating accident early this year, the help of a cane. L.C.H.

What can’t Katrina Lenk do? At MCC Theater’s annual Miscast gala, which features gender-swapped performances, the sultry star of “The Band’s Visit” found a way to own “If I Were a Rich Man,” accompanying herself on the fiddle, slyly giving the lyrics a feminist spin, and delivering a deadpan eye roll that signaled some 2018 skepticism about the wisdom of the wealthy. M.P.

Two young Afghan refugees crossed Europe in search of safety in the Scottish company Vox Motus’s “Flight,” an affecting show that, sans live actors, was a triumph of visual and aural design — the story of the journey told through a series of exquisitely detailed miniature dioramas that gave spectators the heart-racing sensation of being immersed in the boys’ peril. L.C.H.

For years I’ve read theater fans wondering out loud why “Mack and Mabel,” Jerry Herman’s silent-movie-era musical from 1974, has never been revived on Broadway. Great score, bad book; that seems to be the story. But watching Alexandra Socha effervesce her way through the madcap “Look What Happened to Mabel” number in the Encores! revue “Hey, Look Me Over!” put me firmly in the when’s-it-gonna-happen camp. And why not pair her once again with Douglas Sills? S.H.

When Rosanne Cash and John Leventhal premiered songs from their upcoming musical based on “Norma Rae” in the American Songbook series, the excitement was palpable: Finally, a film-inspired show that targets adults, and with a pro-union message to boot. Let’s hope the pair’s efforts find a theatrical stage soon. E.V.

Measure of a year

During the Tony Awards, the members of the Marjory Stoneman Douglas drama club, survivors of a mass shooting, made a surprise appearance, belting — beautifully — “Seasons of Love” from “Rent.” It was a poignant reminder of art’s ability to elucidate and console, a bittersweet way to measure a year. A.S.

Playing a boarding-school dean in Joshua Harmon’s “Admissions,” Jessica Hecht at one point spells out an Indian student’s name to a colleague. On paper the exchange is innocuous but in a few seconds Ms. Hecht gave a master class in comedic timing, her character remaining unfailingly calm and polite as she enunciated for the benefit of someone she clearly thought to be an idiot. E.V.

My Saturday matinee of “Carousel” was interrupted by two medical emergencies. In the second, Jessie Mueller’s Julie Jordan — weeping over the lifeless body of Joshua Henry’s Billy Bigelow — had to stop at full emotional peak when someone started choking in a back row. Several chaotic minutes later, she picked up exactly where she’d left off, as if nothing had happened. E.V.

Fight to the finish

Gracie Gardner’s “Athena,” a deceptively simple portrait of adolescent friendship and the ways that girls temper and blunt their own ambition, concludes in a closely fought fencing match. As directed by Emma Miller and performed by Julia Greer and Abby Awe, it was all clanging épées and panting breath, brutal and overlong. No one wanted it to end. A.S.