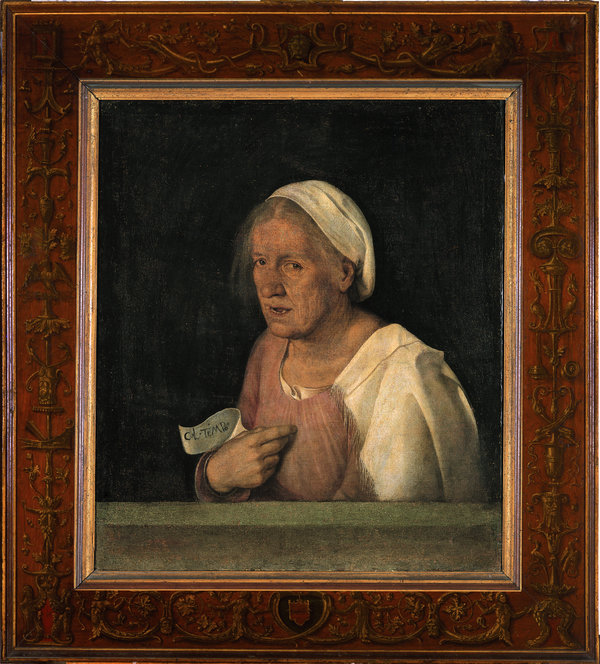 Giorgione’s small oil painting “La Vecchia” (“the old woman”) is uncommonly arresting. With an expression of weary concern and her mouth hanging half open, its subject touches herself on the sternum, as if to tell the viewer: “Were you looking for your future? Here I am.”

Most literally it’s a memento mori, a reminder of the inevitable onrush of infirmity and death. The piece is also a prophecy because Giorgione, along with his teacher Bellini, helped inaugurate the massive innovations of the Venetian Renaissance with exactly this kind shocking naturalism. And you don’t have to go to Venice to see it — fresh from a recent conservation, the 500-year-old canvas will be visiting the Cincinnati Art Museum through May 5. WILL HEINRICH

Good Samaritanism is highly overrated in “Greta,” Neil Jordan’s latest psychological thriller, opening Friday, March 1. Chloë Grace Moretz stars as Frances, a fawn in the New York jungle who still believes in doing the right thing. So when she finds a sumptuous green handbag on the subway, instead of adding a coveted accessory to her wardrobe like another struggling waitress might, she delivers it to its owner, Greta (Isabelle Huppert), a lonely, piano-playing widow with a passion for Liszt’s “Liebestraum,” and some very noisy neighbors.

Their relationship, developed over French dinners, music lessons and a rescue dog, expands like a thirsty sponge to fill the hole left by Frances’s mother’s recent death. Even though Frances’s best friend and roommate, Erica (Maika Monroe), warns her that something seems really, really off.

And indeed it does when Frances makes an unnerving discovery and tries to distance herself from her needy new mother figure, only to discover that Greta doesn’t want to let go. KATHRYN SHATTUCK

“Have you seen anything I should have been in?” That was the great Uta Hagen’s stock reply when she was asked, yet again, why she hadn’t performed lately on Broadway. Or, really, anywhere outside HB Studio, the West Village acting school founded by her husband, Herbert Berghof, where she dedicated decades to teaching.

The question, she said, was “always followed by dead silence.”

It is tempting to wonder how Hagen, who died at 84 in 2004, might have flourished amid the current stage-and-screen profusion of complex female roles. The original Martha in “Who’s Afraid of Virginia Woolf?” by Edward Albee, Hagen won the second of her three Tony Awards for that performance. But after the 1960s, she only appeared on Broadway twice more.

Classical Music: A Playful Side of the French Baroque

Since the late 1980s, the Brooklyn Academy of Music has presented the conductor William Christie’s revelatory accounts of the tragic operas of the French Baroque. This week, Christie and his ensemble Les Arts Florissants instead provide a bit more of a fun twist on the period with the program “Rameau, maître de la dance.”

First staged in 2014 in Europe for the 250th anniversary of the composer Jean-Philippe Rameau’s death, the evening features two pastoral, hybrid opera-ballets, “Daphnis et Églé” and “La Naissance d’Osiris,” composed for royal celebrations in the 1750s. The music is as exquisitely heightened as Rameau’s better-known lyric tragedies, but much more playful: In this buoyant production directed by Sophie Daneman, singers and dancers clad in period garb swirl impishly around the expert musicians of Les Arts Florissants. WILLIAM ROBIN

Dance: A Blend of Figure Skating and Modern Dance

Ice Theater of New York sharpens its blades with a new collaboration to coincide with Black History Month: “Presence,” a solo choreographed by Deneane Richburg for the skater Theron James.

Richburg is known for pushing the boundaries of what can be expressed on the ice. The founder and artistic director of her organization Brownbody, she illuminates the African diaspora through a blend of figure skating, modern dance and social justice.

As part of Ice Theater’s City Skate Concert Series at the rink at Rockefeller Center, Richburg will explore the black body in a premiere, set to music by Nicholas Britell, that delves into aspects of momentum and stillness. In the predominantly white world of figure skating, this is a positive sign that change just might be on the way. GIA KOURLAS

TV: Kate Beckinsale Chases a Ghost in ‘The Widow’

Kate Beckinsale charmed so devilishly as a scheming, scarcely grieving widow in “Love & Friendship” — Whit Stillman’s 2016 Jane Austen-inspired comedy, distributed by Amazon Studios — that she’s now getting an Amazon series of her own. With a marked shift in tone.

In “The Widow,” an eight-part thriller debuting Friday, March 1, and written by Harry and Jack Williams of “The Missing,” Beckinsale plays Georgia Wells, a former British army captain still mourning the death of her husband, Will Mason (Matthew Le Nevez), in a plane crash in the Democratic Republic of Congo three years earlier. Then, while watching the news, she spies a man who looks just like him — running for his life during a riot in the country’s capital.

That apparition propels Georgia from her reclusive existence in Wales to the D.R.C. and the home of Judith Gray (Alex Kingston), Will’s boss at a charity working to change a corrupt system. It also plunges Georgia into the heart of darkness, where aid organizations, child soldiers and miners for cobalt — a mineral used in lithium-ion batteries — collide. And where many who cross her path die. KATHRYN SHATTUCK

Country radio is slowly sliding back toward its more rustic side after a long run of hits that showcased the genre’s rock and pop influences, respectively. The outsized impact of Chris Stapleton, with his gruff, rich voice and defiantly rough-hewed sound, is a factor in that shift, making room for a number of artists similarly committed to country’s twangy core values.

Combs is, so far, the most successful of the group; his last New York show as a headliner was at the cozy Mercury Lounge, in stark contrast to this turn at the 2,200-seat Manhattan Center Hammerstein Ballroom. His distinctive voice is equally suited to crooning ballads (“Beautiful Crazy”) and upbeat kiss-offs (“When It Rains It Pours”), and he picks songs that effectively tackle familiar country tropes — his 2017 debut album “This One’s for You” includes a song called “Beer Can.” But Combs’ strength is finding fresh charm in standard fare, and he has the musical bona fides to win over even a tough New York crowd. NATALIE WEINER

An earlier version of this article misstated the length of time that HB Studio will be celebrating Uta Hagen. It will be a monthslong celebration, not monthlong.