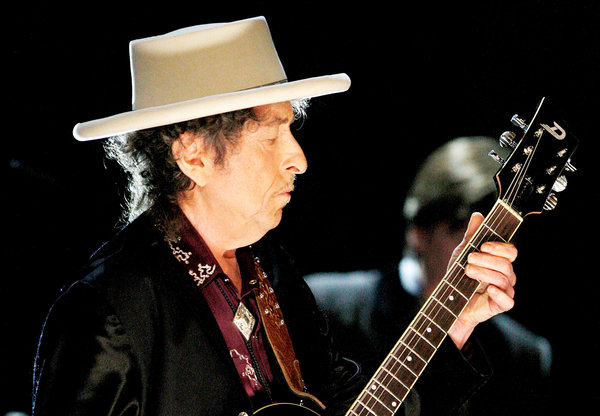 At 77, Bob Dylan is perhaps more enigmatic now than he’s ever been — and he’s been a captivating mystery for over half a century. Why would someone already secure in his status as an icon stay on the road with his Never Ending Tour, which comes next to the Beacon Theater in Manhattan for seven gigs, and play “Mr. Tambourine Man” for what must be the 10,000th time?

Even if we don’t know why, it’s clear that Dylan has no intention of letting the eagerness to mythologize his work via endless bootleg releases (most recently, “More Blood, More Tracks: The Bootleg Series Vol. 14”) slow him down. He’s making whiskey, he’s working with Broadway playwrights, and last year, he released a three-disc album of classics from the American songbook called “Triplicate.”

“It’s not taking a trip down memory lane,” Dylan explained of the album in an exceedingly rare interview with author Bill Flanagan that was posted to his own site. “A song like ‘Sentimental Journey’ is not a way back when song, it doesn’t emulate the past, it’s attainable and down to earth, it’s in the here and now.” At the Beacon, Dylan will continue his quest to bring the music of his own past into the present. NATALIE WEINER

When the Boston Symphony Orchestra arrived at Carnegie Hall in 2017 for its regular New York stint, it was in the wake of a week that had seen the Vienna and London Philharmonics in town. What The New York Times found was an ensemble that, under the direction of Andris Nelsons since 2014, offered calculated passion: “Nelsons and his Bostonians, distinguished by their programming ambition, their precision and their poise, the cool gleam shining off their sound.”

Nelsons and the Bostonians return to Carnegie on Monday for a night dominated by Mahler’s Fifth Symphony, which demands such precision and poise but also unbridled fervor, from the controlled mania of its opening funeral march to the intensive yearning of its famous Adagietto. The concert opens with H.K. Gruber’s 1999 concerto “Aerial,” a subtle tour-de-force composed for Hakan Hardenberger, who will play trumpet, piccolo trumpet and cow horn, and sing a bit, too. WILLIAM ROBIN

This is the thing about “George Balanchine’s The Nutcracker”: It’s not just for children.

The treasured production is more than another holiday tradition — dances come and go, but New York City Ballet’s 1954 version is timeless.

The first act is full of drama, as well as the endlessly spectacular sight of a one-ton Christmas tree growing from 12 feet to 41 feet. It leads to the Waltz of the Snowflakes in which fleet-footed dancers swirl and spin inside a blizzard of snow.

Act 2 brings on an abundance of dancing, but story and movement mingle and merge throughout the ballet, from the Prince’s mime sequence to the extraordinary Waltz of the Flowers. What bridges the two acts, with costumes by Karinska and a set by Rouben Ter-Arutunian and Horace Armistead, is Balanchine’s choreographic magic. Take a young friend or sneak in by yourself. GIA KOURLAS

“The Little Drummer Girl,” set in the late 1970s, is so tangled with intricacies — disguises and aliases, shared names and story lines, loves real and imagined — that at first it’s almost impossible to decipher what’s going on.

There are the two sets of performers at its twitchy core: Charlie (Florence Pugh) and her agitprop theater troupe, summoned from London to Greece by a mysterious benefactor; and Becker (Alexander Skarsgard) and his fellow Mossad agents, ordered by their Israeli spymaster, Kurtz (Michael Shannon), to infiltrate a Palestinian terrorist cell planting bombs throughout Europe. And for this mission, they want to give Charlie a starring role.

When the pieces of this three-night mini-series — spun from the John le Carré thriller by the same title and starting Monday, Nov. 19, on AMC — eventually snap into place, the synapses of your brain will light up like a Christmas tree. The South Korean director Park Chan-wook (“Stoker”), backed by executive producers of “The Night Manager,” swirls a drab palette with vibrant hues while bouncing from the Parthenon to a Lebanese training camp. It’s stunning, thought-provoking and resonant. KATHRYN SHATTUCK

Theater: A Christmas Tale From WWI

“It was as if we had decided to end the fighting all by ourselves,” the British sergeant says, recalling a famous interlude from World War I, when soldiers on the Western Front paused in their mission to slaughter one another and celebrated Christmas together instead.

That’s the story retold in “All Is Calm: The Christmas Truce of 1914,” a docudrama in musical form that evokes the memory of that brief holiday peace through a cappella carols, ballads and patriotic songs and the spoken words of men who were there.

Written and directed by Peter Rothstein, it began as a work for radio, driven by the human voice. With a cast of 10, the live production, now in previews at the Sheen Center for Thought and Culture, opens on Sunday, Nov. 18. A bittersweet offering for the holidays, the show savors the cease-fire, a pacific impulse by the men in the trenches. The war would go on for nearly four more years, leaving millions dead.

“If we had all walked away at that point, could the result have been a truce?” the British sergeant asks. “I doubt it, but it’s a thought.” LAURA COLLINS-HUGHES

Art: South Pacific Ingenuity on Display at the Met

We get the word “mana,” meaning an aura of spiritual power, from the South Pacific, and you can see it in the 30 otherworldly luxury objects, dating as far back as the late 18th century, that makes up the Metropolitan Museum of Art’s “Atea: Nature and Divinity in Polynesia.”

Maybe the most striking is a spectacular black wooden fly whisk from the Austral Islands in French Polynesia. Highly stylized, notched arms descend from the long, beetle-like face of its handle, and braided tresses of human hair billow from the other end. It’s as extraordinary a transformation of the human figure as anything European modernism could come up with many decades later. WILL HEINRICH

Film: The Author Who Gave Us Pippi Longstocking

Pippi Longstocking, Ronia the Robber’s Daughter and the other plucky characters that made the Swedish author Astrid Lindgren (1907-2002) so widely beloved scarcely appear in “Becoming Astrid.” Then again, Pernille Fischer Christensen’s drama is hardly a children’s tale.

Christensen frames her story with an elderly Astrid (Maria Fahl Vikander) sorting through mailbags full of birthday greetings from young admirers. But it’s the teenage Astrid (Alba August) she runs with: effervescent and a tad rebellious, quick to twist the story of Sodom and Gomorrah into a verse about soda pop, or twirl alone across the dance floor when boys don’t take her hand.

Then Astrid lands a newspaper internship and captures the eye of her editor, Reinhold Blomberg (Henrik Rafaelsen), the father of one of her friends. It’s a relationship she appears to want as much as he does. But when she becomes pregnant, her parents send her from their farming community to Stockholm, where she will enroll in a secretarial course and have her baby in secret while Reinhold obtains a divorce.

Beautifully shot and refreshingly candid, with a sparkling performance from August, “Becoming Astrid” opens on Friday, Nov. 23, in New York and Los Angeles, before a national rollout. KATHRYN SHATTUCK