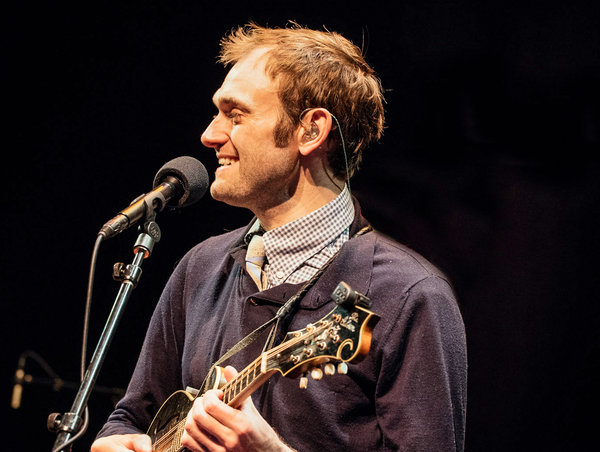 Yes, Chris Thile is based in New York City, and yes, he is the voice of the nation’s folksiest variety show. Since 2016, he’s been host of American Public Media’s “Live From Here,” a revamped version of “A Prairie Home Companion,” Garrison Keillor’s decades-long paean to storytelling and Midwestern values. But the dissonance dissolves when considering that Thile is a virtuoso mandolinist for the groups Nickel Creek and the Punch Brothers.

For the month of December, Thile and his band, led by super-producer Mike Elizondo, have been broadcasting live weekly from Town Hall in Manhattan. The two remaining shows will star indie rock favorite St. Vincent and “The Late Show” bandleader Jon Batiste; and classical ensemble The Knights.

There are still stories told and winkingly political sketches performed, but those musical A-listers form the show’s core. Expect all the visiting artists to step outside their musical comfort zones. NATALIE WEINER

Can there ever be too much of J.K. Simmons? For fans of “Counterpart” — with the masterful character actor Simmons doing leading-man double duty — the answer is a walloping no.

In its first season, “Counterpart” chased Simmons around Berlin, playing two versions of Howard Silk that are subtly, yet strikingly distinct. One is a meek office drone at an international agency called the Office of Interchange, while his badass doppelgänger operates in a secret parallel realm called the Other Side. Their mission: to swap identities and keep the gentler Howard’s comatose wife, Emily (Olivia Williams), alive. Then a terrorist attack sends the portal doors slamming shut, leaving the Howards stranded in each other’s world.

Season 2 of Justin Marks’s sci-fi espionage thriller, returning to Starz on Sunday, Dec. 9, finds an awakened Emily bewildered by her faltering memory and the nagging sense that something about her husband isn’t quite right. It also sends Peter Quayle (Harry Lloyd), the Office’s deputy director of strategy, in search of evildoers within his organization — while trying to save himself from his wife, Clare (Nazanin Boniadi), now revealed to be the other, deadlier version of the woman he fell in love with. KATHRYN SHATTUCK

The holidays are upon us, which means that most of the world’s classical music organizations are dedicated, at some point this month, to performing Handel’s “Messiah.” Two organizations in New York this week offer noteworthy approaches.

Billed, flatteringly, as the “Messiah” of all “Messiahs,” the New York Philharmonic’s run features the conductor Jonathan Cohen overseeing a strong cast that includes the countertenor Anthony Roth Costanzo, fresh off his much more outré approach to Baroque arias with the glittery “Glass Handel” project.

The Trinity Wall Street church has been presenting “Messiah” since the 1770s, and its choral and orchestral forces, led by its music director Julian Wachner, should provide an invigorating and unorthodox take on the holiday staple. (The Trinity performances will also be livestreamed). WILLIAM ROBIN

Through rigorous executions of distorted or surreal forms, Emily Mae Smith’s oil paintings and Genesis Belanger’s ceramics dramatize the painful contradictions of inhabiting a female body. The high point of “A Strange Relative,” their astute two-woman show at Perrotin Gallery in Manhattan, is an installation in which a sculpture and a painting, both on the subject of a woman at her dressing mirror, also mirror each other.

On Belanger’s table are a loose eyeball, crushed cigarettes, a wad of gum and a tongue emerging from a lipstick tube; in Smith’s painting “Medusa Moderne,” a disconsolate broomstick with a serpentine green coiffure hunches over a lineup of similar objects. With so many layers of performance and reflection, how can you tell what’s real? WILL HEINRICH

Dance: Getting Political With Dancenoise

In 1983, the dancers Anne Iobst and Lucy Sexton joined forces as the irreverent duo Dancenoise. Regulars on the East Village performance scene, they quickly became known for their hard-core feminism and gory, kitschy comedy. Knives and fake blood were recurring accessories, as indispensable as combat boots and lingerie.

Their appearances grew more sporadic after Ms. Iobst moved to San Francisco in the late ’90s, but in recent years they have regained momentum, with a program at the Whitney Museum of American Art in 2015 and now a 35th-anniversary show at New York Live Arts in Chelsea.

While repurposing some tried-and-true material, the Dancenoise of today dives into the vortex of our current political moment. “Lock ’em Up!,” as the Live Arts evening is titled, features the performers Tyler Ashley, Laurie Berg, Heidi Dorow, Connie Fleming, Greta Hartenstein and Madison Krekel, along with films by Charles Atlas and dramaturgy by the choreographer Sarah Michelson. SIOBHAN BURKE

Theater: A Ghostly ‘Turn of the Screw’ at BAM

There is some chance that the young governess was overeager for the job. At 20, a parson’s daughter, she didn’t ask many questions of the disarmingly handsome Londoner who hired her to look after his young niece and nephew in the country — not even when he stipulated that her chief duty would be to leave him undisturbed.

So when she starts spotting ghosts around the grand old house, in Henry James’s spine-tingling novella “The Turn of the Screw,” she doesn’t trouble her employer about it. She says not a peep, either, about her conviction that these menacing spirits are eyeing her suspiciously angelic charges.

Is she imagining it? Have her sleepless nights sent her over the edge? With onstage cameras rolling, the governess (Lucia Roderique) recounts the eerie episode in “Strange Window: The Turn of the Screw,” a new multimedia adaptation by the Obie Award-winning experimental company the Builders Association. Directed by Marianne Weems, the show arrives on Wednesday, Dec. 12, at the BAM Harvey Theater as part of the Brooklyn Academy of Music’s Next Wave Festival. LAURA COLLINS-HUGHES

When Nadine Labaki’s “Capernaum” had its premiere at the Cannes Film Festival in May, it received a 15-minute standing ovation and predictions of a Palme d’Or win. (It lost out to Hirokazu Koreeda’s “Shoplifters,” but took home the Jury Prize.)

Heart-rending and raw, “Capernaum” chronicles the chaotic existence of Zain (Zain Al Rafeea), an impoverished 12-year-old delivery boy full of brooding and bravura in Beirut who is desperate to save his younger sister Sahar (Haita “Cedra” Izzam) from marriage to a much older man. Fleeing his callous parents’ overcrowded home, he ends up living with Rahil (Yordanos Shiferaw), an illegal immigrant from Ethiopia, and caring for her baby. When Zain is sentenced to five years in prison for a stabbing, he sues his mother and father for, he says, “giving me life.”

Labaki shot 520 hours of footage across six months as she coaxed inhabitants of the city’s slums — including Zain, a Syrian refugee now resettled with his family in Norway — into re-enacting their struggles. “Capernaum,” Lebanon’s Oscar entry for best foreign-language film, opens in New York and Los Angeles on Friday, Dec. 14, before a national rollout. KATHRYN SHATTUCK