The Year in Yesteryear: Standout Music Books and Boxed Sets

While streaming opened doors for many of 2018’s most exciting new artists, retrospective boxed sets and photo books held the keys to gems from the past, from a revelatory 50th anniversary reissue of “The Beatles” (known best as the White Album) to “More Blood, More Tracks: The Bootleg Series Vol. 14,” an expanded version of Bob Dylan’s 1975 masterpiece, “Blood on the Tracks.” Here, the pop music critics of The New York Times choose some of the most notable collections of 2018. 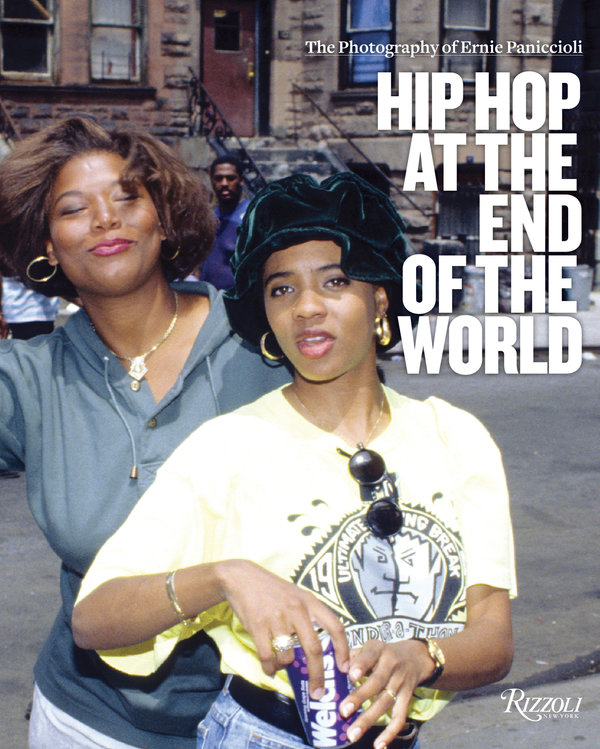 To capture history, you have to be present for it. “Hip Hop at the End of the World: The Photography of Ernie Paniccioli” (Rizzoli; $40) is filled with photos only Paniccioli has because, from the mid-1970s forward, only Paniccioli thought to be there — and was permitted in the room. (That’s an underappreciated photographic skill: not getting kicked out.)

As a chronicler of hip-hop’s formative years, Paniccioli is essential; his voluminous archive was acquired by Cornell. His work is casual and on-the-fly. Many of the photos in the book are snapshots — literally — the sort of crammed-into-the-frame group pictures you take of friends you might not see for a while. Many of these pictures seem shot in a hurry, before the moment slipped away.

Occasionally though, Paniccioli puts his subjects in dialogue with their surroundings: Fat Joe morosely standing atop a crushed car, or KRS-One posing sternly in front of the United Nations, or Nas, shot from below, arms wide open, in front of ecstatic clouds and a wide, blue, boundless sky.

While Paniccioli shot for some magazines, including Word Up!, he largely predated the era in which hip-hop was considered the stuff of serious artistic photographic attention. “Contact High: A Visual History of Hip-Hop” (Clarkson Potter; $40), edited by Vikki Tobak, overlaps slightly with his era, but mostly picks up where he leaves off. This anthology shows hip-hop’s growth from the perspective of those charged with photographing it, mostly via magazine portraits and album covers.

The photos are of varying intensity, by photographers with varying degrees of intimacy with their subjects. Each image is paired with a brief anecdote from the photographer — Glen E. Friedman, Jamil GS, Barron Claiborne, Danny Clinch, and many more — about the shoot. Clinch’s photos for Big L’s debut album are particularly moving, the rapper and 20 of his friends crammed onto one stoop.

The images are accompanied by contact sheets, showing the just-before and the just-after, emphasizing that these are largely posed, not spontaneous, images. That’s the real value of “Contact High”: capturing hip-hop’s transition from improvisation to construction, from thrown-together fashion to stylists, from naturalism to poses. By the 1990s, when many of these photographs were taken, rap’s young stars were as meticulous about developing their visual images as much as their musical ones. (Though there is one great pseudo-candid here: XXL magazine’s 1998 A Great Day in Hip-Hop shoot in Harlem, by Gordon Parks, which gathered almost 200 of the genre’s leading lights for a giddy group shot.)

“Contact High” includes some of Janette Beckman’s early hip-hop photography — she was a key portraitist in the 1980s. In her new book, “The Mash Up” (Hat & Beard; $40), many of her old shots are used as source material for graffiti artists, who draw atop them. (The book is curated by Cey Adams, responsible for developing much of hip-hop’s graphic identity in the 1980s). The most simpatico work comes from early era graffiti writers: Crash drawing on Futura, Lady Pink on Queen Latifah, Part One on Eric B. & Rakim. These pieces feel like dialogue, not tug-of-war, and radiate the sense of hip-hop as a living, breathing tradition, with innovators and inheritors, forever learning from one another.

Now, more than four decades after hip-hop began, it is a minter of stars, a driver of style, a billion-dollar business. But it is also a lived culture, inhabitable not just by its celebrities, but also by those who are young, with dreams of their own. “Ferris Bueller: Catharsis” (which will be released in January via Steidl; $37.95) captures the personal collections of Rodney Bailey (known as Ferris Bueller), who parlayed a Roc-A-Fella Records internship into creative work with Kanye West, the Diplomats and others.

His childhood aspirations are all here, captured in photos by Alex Bohn: worn-out cassettes, rough-at-the-edges posters, magazines, party fliers, broken old cellphones. But the most affecting photos are of sneakers. His old pairs are decayed from honest wear — in their cracks and creases you can see ambition and hustle. There is both a comfort and a wisdom in these photos, a reminder that hip-hop is something you could watch, but also own, and then build into a new life. JON CARAMANICA

Bobbie Gentry’s 1967 debut single and biggest hit, “Ode to Billie Joe,” was about a suicide; the narrator of another hit, “Fancy,” was an unrepentant hooker. Gentry’s songs brought telling unconventional detail to her Mississippi roots; she was also musically sophisticated and more ambitious than her label could quite handle. After her 1968 masterpiece (and commercial flop) “The Delta Sweete,” a borderline psych-folk concept album haunted by death and spirituality, she veered toward blander pop, but she took over songwriting and production for her last album, “Patchwork,” in 1971, a suite of elaborately orchestrated character-study songs. This completist box includes all of her albums and Capitol singles along with demos, unreleased sessions (including some convincing jazz standards) and a full disc of BBC live recordings. Gentry gave her last performance in 1981 and has been out of public view since 1982; this set offers good reason to miss her. JON PARELES

In 1968, after seven years of making increasingly mediocre movies, Elvis Presley needed to prove he was no has-been. He reclaimed a rock audience in the NBC television special “Elvis” — especially in a performance segment where he sat on a small stage with his 1950s bandmates, surrounded by squealing girls, clowning but then fully inhabiting his songs. He growled, he crooned, he stood up and shook his hips; the show positioned him as a rebel and, at the end, a white-clad redeemer. This set, most of it previously released, includes the original hourlong show plus extensive outtakes, including the full-length small-stage performances and audio rehearsals with the top Los Angeles musicians known as the Wrecking Crew — sometimes jokey, sometimes vociferous. PARELES

No amount of documentation or analysis can demystify the wild genius of “Electric Ladyland,” the last album Jimi Hendrix completed. It carried a deep blues spirit into new hallucinatory realms; 50 years later, it’s still overwhelming, dizzying, earthy, ecstatic. Alongside the complete album, this set probes the making of “Electric Ladyland” with an extended video documentary and a CD of Hendrix’s solo demos and early group takes. It also unveils an amateur recording of an anarchic 1968 Hollywood Bowl concert. Meanwhile, as if the copious stereo phasing and panning of the original album weren’t enough, there’s a whole new surround-sound mix. PARELES

Lefty Frizzell (1928-1975) taught generations of country singers how to sound casual and natural through honky-tonking, hard times and especially heartache. The influence of Frizzell’s stoic drawl, liquefied syllables and tightly controlled ornaments is so pervasive that it’s often equated with classic country style. This box holds Frizzell’s entire career, from early demos to his first hit — the 1950 country standard “If You’ve Got the Money (I’ve Got the Time)” — and all of his studio recordings, along with songs recorded for radio broadcast and an eight-CD audiobook biography by Lefty’s brother David Frizzell. Lefty Frizzell was a hard drinker — another subject he sang about — but his aplomb rarely faltered; his decline becomes audible only in some 1970s songs. From the 1950s, when he wrote most of his own material, through the 1960s and 1970s, when he largely relied on other songwriters, long stretches of his catalog are anatomies of melancholy, jealous, bitterness and regret. PARELES

This is a travel diary from 1955, in prose and audio, by Deben Bhattacharya, an Indian writer-turned-ethnomusicologist who made a trip by van from the Bosporus to Bengal with a tape recorder: through Greece, Turkey, Syria, Iraq, Iran, Afghanistan and India. A single LP from these recordings was released in 1956 as “Music on the Desert Road: A Sound Travelogue,” an album that left an impression on Frank Zappa, among others. Bhattacharya recorded professionals and amateurs performing classical and folk, secular and religious music, as well as Bedouin workers rhythmically grinding coffee and a ninth-century Persian epic poem intoned, with drumming, to pace an exercise routine. Bhattacharya’s journals are atmospheric period pieces, and his field recordings are mono but vivid and often raw, capturing music that was far more geographically and culturally isolated back in 1955. PARELES

It’s still startling that Fleetwood Mac toured in 2018 without Lindsey Buckingham, the guitarist and songwriter whose complex sparkling guitar parts and melodic architecture were absolutely essential to the band’s sudden 1970s superstardom; his guitar solos were onstage climaxes. Buckingham’s solo recordings can play like research and development for his contributions to Fleetwood Mac — a virtuoso on his days off. He toys with guitar tones and production strategies; he takes more liberties with his vocals; he leaves things less glossy. And while Fleetwood Mac may have commandeered most of his poppiest hooks, he kept some for himself including “Trouble” and “Holiday Road.” The three-CD and six-LP configurations include two previously unreleased songs and more than a dozen live band performances. PARELES

The Art Ensemble of Chicago — a trailblazing group equally dedicated to minimalism and excursion, Pan-African folklore and avant-garde improvising — had been around for about a decade when it began releasing albums on ECM in 1978. The German label recorded the ensemble with an ear for detail and depth, making sure each vibraphone chime and trumpet slash came through with distinction, and fed into a spacious sound. This monumental box collects the Art Ensemble’s albums from the late 1970s and ’80s, plus group members’ various other ECM projects over the years, including some of the trumpeter Lester Bowie’s standout albums with Brass Fantasy and a number of the saxophonist Roscoe Mitchell’s finest recordings under his own name. GIOVANNI RUSSONELLO

In 1963, John Coltrane was about halfway into the avant-garde, pushing against an acoustic-jazz paradigm that he had seemed to master (his working quartet then was arguably the greatest in jazz history), and exploding the advanced harmonic systems he’d fashioned for himself. “1963: New Directions” includes every known track Coltrane recorded for Impulse! that fateful year, including the newly discovered recordings that were released in June as “Both Directions at Once;” his album with the vocalist Johnny Hartman; and landmark live albums from the Newport Jazz Festival and the club Birdland. RUSSONELLO

With Newvelle, the only way to play ball is to buy season tickets. This high-end label puts out six handsomely packaged albums a year — not reissues, but new music — and they’re not available à la carte. You can buy the entire 2018 set — Newvelle’s third season — now, or sign up to start receiving the 2019 albums, one by one, every two months. All of Newvelle’s recordings are out only on vinyl, and cannot be streamed anywhere. The packaging is part of the appeal: This year’s collection features abstract, irradiant artwork on each album cover by the Polish photographer Maciej Markowicz, and short fiction on each sleeve by Ingrid Astier. But the real reason to spring for this collection is the smartly chosen roster of talent and the rich, analog sound of the recordings. Season 3 includes enrapturing albums by some of jazz’s great lesser-known talents, such as the drummer Francisco Mela, the Icelandic bassist Skuli Sverrisson (in a glass-darkly duo with the guitarist Bill Frisell), and the trumpeter Jason Palmer. RUSSONELLO