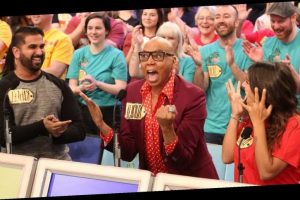 Start your engines: RuPaul’s Drag Race UK is shaping up to be the January tonic we all need.

We know that drag can’t make everything bad go away, but a big dose of colour, glitter and camp sure can help. And if there’s one TV show that’s going to help us chase away the January blues, we’d put all our money on RuPaul’s Drag Race.

In case you’re in need of a reminder, season two of the UK spin-off is just around the corner. To date, the queens have all been confirmed, and a fierce line-up of celebrity judges is slowly being revealed, which includes the likes of Lorraine Kelly, Sheridan Smith, Elizabeth Hurley, MNEK and Jourdan Dunn.

RuPaul must have wisely foreshadowed that we needed extra Christmas presents to pull us through this year though, because three new guest judges were announced today, and they’re all equally spectacular.

“The Christmas presents aren’t stopping,” announced the official Drag Race UK Twitter account, before revealing that Dawn French, Maya Jama and Jessie Ware would be joining the judging panel on the next series.

Jessie Ware also confirmed the news on Twitter, posting a photo of herself looking suitably majestic alongside the caption: “I’m gonna be a guest judge on @dragraceukbbc! Dreams do come true!!!!! Had such a great time with them. The Queens are fire, you’re going to LOVE them x”.

Maya Jama, meanwhile, seemed understandably excited at the news. “The way I love this show,” she wrote on Twitter alongside a slew of emojis. “Can. Not. Wait!!!!”

The new series sees twelve queens from across the UK compete to show off their charisma, uniqueness, nerve and talent in the hope of being crowned the next Drag Race superstar. This year, that challenge falls to Tayce, Joe Black, A’Whora, Tia Kofi, Ellie Diamond, Sister Sister, Veronica Green, Bimini Bon Boulash, Ginny Lemon and Asttina Mandella.

We’ll be releasing Ru-caps on all the shenanigans when the new series airs, so be sure to check back here in January. Now, if you’ll excuse us, we’re off to blast Jessie Ware’s What’s Your Pleasure.

END_OF_DOCUMENT_TOKEN_TO_BE_REPLACED

END_OF_DOCUMENT_TOKEN_TO_BE_REPLACED
We and our partners use cookies on this site to improve our service, perform analytics, personalize advertising, measure advertising performance, and remember website preferences.Ok