Home » Entertainment » These Kids Are Following in Their Supermodel Moms' Footsteps

These Kids Are Following in Their Supermodel Moms' Footsteps 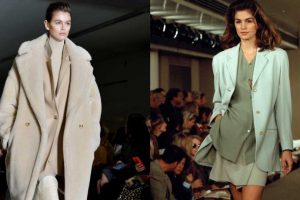 Brooke Shields, Cindy Crawford, Christie Brinkley — some of the world’s most famous supermodels are also moms whose kids are wanting to follow in their footsteps.

Cindy Crawford’s daughter, Kaia Gerber, now 18, was first approached by IMG at just 13-years-old. “It was a good thing that she couldn’t work on the runway until she was 16,” Crawford told Net-A-Porter. “There are laws about that. After that, I couldn’t really hold her back.” Kaia has since walked in hundreds of fashion shows and donned the cover of Vogue, looking exactly like her legendary mom.

Having experienced model-life firsthand it might not be surprising that these famous women want to keep their kids from the pressures they felt. Elle Macpherson, 56, and Brooke Shields, 55, have said they wanted to keep their kids out of the limelight.

Matt and Grier in Montauk, NY for @_manabouttownuk

“I think they need to really have as much of a conventional upbringing as you can in New York City, with kids their own age, and not be thrown into something with all the pressure,” Shields told The Post when asked about her daughter Grier’s budding modeling career. And Macpherson similarly has wanted her boys out the public eye but admits that with social media, there isn’t much she can do.

So while modeling may not have been what these women have wanted for their children they are in full support. Many of today’s top models are the children of celebrities yet these rising stars’ are making a name for themselves. “Even though we might carry the same last name,” Kate Moss’s daughter reflected in an interview with Instyle, “we have to work hard to gain trust and respect in the industry. In the end, we just want to make our parents proud.”