Home » Entertainment » ‘They’re Doing It Out of Love’: The Big Band Rises Again

‘They’re Doing It Out of Love’: The Big Band Rises Again

Eighteen musicians were sardined onto the stage at the Slope Lounge in Brooklyn on a recent Monday night, passing around a ricocheting, Argentine rhythm and a series of harmonic flurries that seemed to open wider as the piece, “Tangoing With Delusion,” went on. As individual players stood up to solo, they played as if climbing a mountain in the midst of a rockslide: making their way boldly, rerouting constantly.

Erica Seguine, the tune’s composer, was facing the band, conducting with large, emphatic gestures and an ear-to-ear grin. Her group, the Erica Seguine & Shannon Baker Jazz Orchestra, has become something of a regular presence on this stage in Park Slope, where the saxophonist Joshua Schneider books a different jazz orchestra every Monday night.

There are plenty to choose from these days. Quietly, beneath the radar of even most jazz lovers, the big band has been charging back. For a long time, the large ensemble has seemed a clunky vestige of American music’s past — outmoded since bebop supplanted swing in the 1950s — but a bumper crop of enterprising, conservatory-trained composers sees it differently: as a vessel of grandiose possibility.

This all makes sense: A rigorous, composerly view of the big band has continued to thrive in small pockets of the New York and European music scenes. And today — when big, associative ideas and limitless ambition are the coin of the realm — that tradition is finding new resonance. The saxophonist Kamasi Washington, jazz’s pre-eminent crossover star, has turned heads with the enormity and zeal of his approach, sometimes using dozens of musicians at once. But in New York City, musicians springing from jazz’s academic mainstream are going a slightly different way. 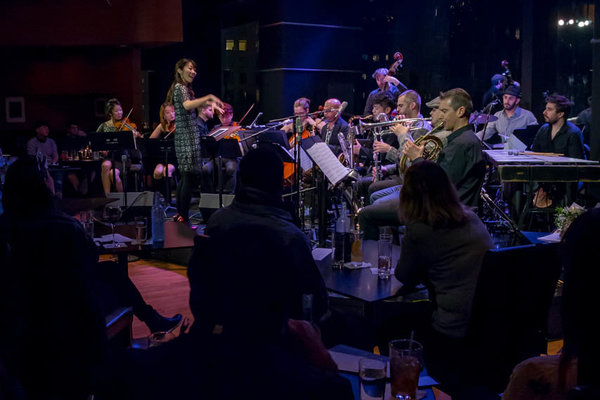 A frequent face in the Slope Lounge audience is Darcy James Argue, a bandleader whose Secret Society — a large ensemble with a dark-hued, rock-inflected sound — is now renowned in the jazz world. At 43, he has become a mentor to many of today’s young big-band composers, and at the Seguine/Baker show, he sat quietly at a table near the stage for both sets.

A few days earlier, over cappuccino at a cafe in nearby Carroll Gardens, Mr. Argue ran through all the large-ensemble shows featuring young bandleaders taking place that week. He counted four. None was at a typical jazz club. Big bands are notoriously difficult to maintain: Aside from the challenge of corralling 16 or 18 musicians at once, a band fee can all but disappear when dispersed that widely. And clubs are reluctant to book the unwieldy ensembles, especially if they don’t have devoted followings.

But young musicians are finding ways to adapt. “It seems like no matter what, the possibilities of writing for big band are so musically irresistible that people keep finding a way to make it work,” Mr. Argue said. “Which is really inspiring.”

Jim McNeely, the pianist and composer, mentored Mr. Argue and a slew of other rising bandleaders during his years at the BMI Jazz Composers Workshop, a sort of finishing school for young composers. “There’s kind of a perfect storm of these young writer-bandleaders and these young musical performers who want to play something interesting and challenging,” Mr. McNeely said in an interview. “Most of them are doing it without any kind of institutional support, and they’re doing it out of love.”

One of Mr. McNeely’s standout students at the Manhattan School of Music, where he teaches, was Miho Hazama. She moved to the United States in 2010 to pursue a graduate degree in jazz composition, and quickly became a talked-about writer and arranger. Ms. Hazama had primarily studied classical music before, so she created m_unit, a 13-piece ensemble mixing typical jazz-band instrumentation with strings, vibraphone and French horn.

The group’s 2015 release, “Time River,” was both grandiose and immediately rewarding, guided by melody. On “Under the Same Moon,” featuring a cameo from the famed arranger Gil Goldstein on accordion, m_unit’s rich corps of horns returns repeatedly to a lovely, whirlpool phrase, spinning it into your memory. The ensemble’s second album, the equally riveting “Dancer in Nowhere,” is due in February.

Since 2014, Ms. Hazama has curated the Jazz Composers’ Showcase at the Jazz Gallery, an intermittent series where rising composers take turns conducting the same group of musicians on a single night. While born of economic necessity, the cooperative model allows “composers to meet other composers,” Ms. Hazama said. “You share the same big band but each composer has their own colors, and it’s fascinating to hear how different they are.”

Through gatherings like these, the city’s collection of young big-band composers has started to resemble a community of its own. Collaborative outfits like that of Ms. Seguine and Ms. Baker are becoming more common, with composing and organizing duties split between two bandleaders. The bassist Edward Perez and the saxophonist Michael Thomas co-run the Terraza Big Band, which plays monthly at Terraza 7 in Queens — one of the few jazz clubs to host an emerging big band on a regular basis. And the saxophonists Anna Webber and Angela Morris colead a jagged-edged band that has begun to turn musicians’ heads.

“Once you realize what a huge challenge it is to make those projects happen, you become really dedicated to helping other people,” said Brian Krock, an alto saxophonist and bandleader who this year released a strong debut album (produced by Mr. Argue) introducing Big Heart Machine, his 18-piece ensemble. It plays muscly, warped original music, informed by metal, serialism and the jazz avant-garde, as well as more classic big-band influences like Bob Brookmeyer.

The big-bands boom looks like the latest example of jazz’s academic-industrial complex, and of an emerging professional class of overeducated musicians with nowhere to play. Most of New York’s new big bands are run by 20- and 30-somethings who recently graduated from a conservatory or a liberal-arts music program; like most such musicians, they will eventually find careers as teachers. But the music itself continues to break new ground.

And there are exceptions to the rule. Igmar Thomas, a trumpeter, is the musical director of Lauryn Hill’s touring group, and also leads the Revive Big Band with the outright intention of fusing jazz and hip-hop. Its first album is due in 2019. Though he did go to Berklee College of Music, he did not study arranging or composition there. His inspiration as a leader comes largely from his formative experiences onstage: with Lionel Hampton, whose group he joined as a youngster, and Roy Hargrove, in whose big band he briefly played.

The Revive Big Band grew out of a weekly jam session that Mr. Thomas hosted in Harlem, through the concert-presenting and advocacy group Revive. He grew frustrated that so many talented musicians often turned up on a given night, and not all could get time to play. “I’m just sitting there saying, ‘What can I do to get all these great musicians satisfied, and playing together?’” he remembered. The answer, he figured, was to start a big band. But the ensemble has never enjoyed the consistent home venue that those Revive jam sessions did.

For his part, Mr. Argue remembered that the Secret Society’s bimonthly gigs at the Bowery Poetry Club in the late 2000s were essential to its development. “It was an opportunity for us to grow and build as a band,” he said. “The ecosystem is just so different now.”

An exception is Terraza 7, the intimate club in Jackson Heights, Queens, where Michael Thomas and Edward Perez’s band plays the first Thursday of each month, performing melodious progressive jazz and covers of pop classics, sometimes shaped around rhythms from the Caribbean or South America. Grateful for the space, the band often assembles onstage well in advance of show time, conducting an open rehearsal that injects a liberated, interactive atmosphere into the bar.

In early December, playing for about a dozen listeners seated upstairs — but twice that at the bar below, where there’s no admission fee but you can still see and hear the musicians — the Terraza Big Band waded deeply into Mr. Perez’s version of “The Night Has a Thousand Eyes.” Counterpunching horn blasts gave way to a sharp unison passage of trumpets and saxophones, and the full ensemble ultimately coalesced into a gliding swing feel. Next the group lit into Michael Jackson’s “Human Nature,” rearranged by Mr. Thomas so that the melody moved in warm, chordal clusters. As the tenor saxophonist Jeremy Powell rose to solo, muted trumpets filled in below. It was a familiar song, and the audience was fully on board, but the ideas were entirely new.