This dystopian survival drama is your new TV obsession 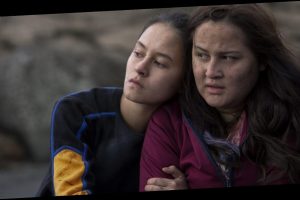 It often feels, especially nowadays, as if we are on the cusp of a real-life dystopia. Is it any wonder, then, that TV shows such as The Handmaid’s Tale and Netflix’s The Rain have proven so popular among viewers?

Sure, these series offer up a ‘worst case scenario’ for us all to fret over, but they’re also packed full of strong, driven characters. And, better still, they inject us with a surge of against-all-odds hope, too.

Of course, it’s been a wee while since we had a new drama of this ilk to obsess over. Amazon Prime Video, though, is here to fill that gaping void in our lives with their new show, The Wilds.

Best TV shows of 2021: the 23 must-watch series coming to our screens

Here’s what you need to know.

What’s the plot of The Wilds?

The Wilds – which has been described as being “part survival drama, part dystopic slumber party” – explores the past and present struggles of a group of young women from radically different backgrounds after an airplane crash leaves them stranded on a deserted island.

Which, yeah, sounds very Lost meets Pretty Little Liars, and we’re into it.

“The castaways both clash and bond as they learn more about each other, the secrets they keep, and the traumas they’ve all endured,” promises Amazon Prime Video’s official synopsis.

“There’s just one twist to this thrilling drama… these girls did not end up on this island by accident.”

Is there a trailer for The Wilds?

“It feels like everywhere I go, somebody’s asking me to meet some expectation,” explains one of our survivors in the pre-crash world.

And then… well, watch the first trailer for The Wilds and see for yourself:

“Everything about the island feels off,” warns the trailer.

Who stars in the cast of The Wilds?

The cast of The Wilds boasts some of Hollywood’s biggest rising stars, including…

Dystopian novels: 19 powerful and frightening books that every woman should read

Who created The Wilds?

The series is executive produced by Marvel’s Sarah Streicher, and also boasts Sex And The City’s Amy B. Harris as the showrunner, so it has some serious #girlpower behind it.

What are people saying about The Wilds?

If you think The Wilds is just your usual teens-on-a-desert-island drama (ha!), then think again.

“The series offers up a vivid portrayal of what it means to grow up female in our time – whether you are lost in the wilderness or not,” promises Amazon Prime Video.

When will The Wilds be available to stream?

The Wilds will drop on Amazon Prime Video on Friday 11 December.

END_OF_DOCUMENT_TOKEN_TO_BE_REPLACED

END_OF_DOCUMENT_TOKEN_TO_BE_REPLACED
We and our partners use cookies on this site to improve our service, perform analytics, personalize advertising, measure advertising performance, and remember website preferences.Ok