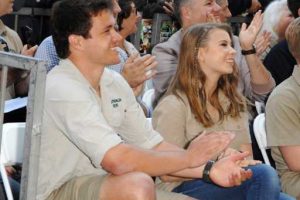 Ever since the world lost Steve Irwin in 2006, we’ve happily watched as his family has continued to uphold the incredible legacy of wildlife conservation he left behind. His kids Bindi and Robert Irwin have taken on larger roles as they’ve grown older alongside their mother Terri at their famous Australian Zoo. Fans are able to catch a glimpse at the incredible work the Irwin family participates in daily in their show Crikey! It’s the Irwins, and we’ve been eagerly awaiting the upcoming third season on Discovery+. Luckily for us, we finally got a look at what’s in store for the February premiere — and between Bindi’s pregnancy reveal and her tearful tribute to late dad Steve, we’re feeling emotional.

“2020 has been a hurricane for all of us,” Bindi says at the start of the video clip, via People. Due to the pandemic, their beloved zoo was forced to close down, which Terri admits is the biggest challenge their family has faced since the death of her husband.

“We try to remain positive and hopeful like everything’s going to be okay, but I just really want us to be open,” a choked-up Bindi tells the camera.

At one point in the clip, the screen pans to a speech Bindi is making as she holds back tears: “We will continue to carry on in dad’s footsteps and make sure that everything he lived and died for continues on.”

Feeling emotional? Trust us, we are too.

Bindi has kept the memory of her father alive in everything she does, from her social media posts to her passion for wildlife — so it makes complete sense that she feels the most connected to her father when she is around the animals he loved so dearly. Thankfully, she has her family who shares her passion and supports her every step of the way.

At the end of the clip, we hear Bindi joyfully announce her pregnancy to her family alongside her husband Chandler Powell, and hear her her mother say that Steve “would be proud that we survived this.”

We totally agree that Steve would be so proud of his strong family and we can’t wait to see the wholesome content the Irwins will share with us this season!