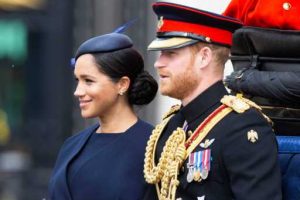 Here comes the royal tone police! In Prince Harry and Meghan Markle’s long process of withdrawing from the royal family, both sides seemed to have finally reached an impasse, with the Queen declaring earlier this month that the Sussexes would always remain “much loved members of the family.” There’s no sugarcoating the fact that this was not a happy ending: Harry had wanted to hold on to his royal patronages and the Queen had wanted him to return to his post as a senior royal, and neither happened. Royal commentator Richard Fitzwilliams was far from alone in noting to Us Weekly that the Sussexes’ final statement had assumed a more defiant tone than previous communications, but what he reads into that tone is unique and ultimately may be a mistake. Fitzwilliams asserts that this statement was the couple’s last attempt to “lecture” the Queen, but that’s not at all how we see their position.

On Us‘s “Royally Us” podcast, Fitzwilliams gave suggestions on how, in his experience as a royal commentator and expert for outlets like CNN, Meghan and Harry could have handled this final statement better.

“We know they’re unhappy, I totally accept that,” he says (and how gracious, by the way). I’d like to see a more balanced approach…what it showed is how angry they are.”

He further noted that the language of their statement seemed intended “to lecture the Queen” — which truly sounds like a daunting task for anyone, let alone her grandson.

But let’s first deal with the contention that Harry and Meghan are, right now, at the crux of their anger toward the royal family. While being stripped of their final appointments was certainly a disappointment, our latest peek into the Sussexes’ lives courtesy of The Late Late Show With James Corden showed these two more relaxed than they’ve been in years, cracking jokes and sharing details about family life as they await their second child together. They’re booked, busy, and better than ever. While they may have been downright furious at the royal family just a year ago as they gritted their teeth and rounded out their final royal engagements (and we don’t even know that they were then), that would make far more sense than them raging against the Queen now that she has relatively no power over their lives.

What’s more, the most seemingly inflammatory part of Meghan and Harry’s statement is this: “We can all live a life of service. Service is universal,” which functioned as a sort of rebuttal to Her Majesty removing them from various royal service appointments. Their response certainly asserts a power beyond the influence of the royal family, but it’s not trying to “lecture” the Queen on anything she’s done. They’re setting out on a new, uncharted path. They’ll need to make the rules — and declare them — along the way. And if every time they assert their independence is viewed as an attack on the royal family, then both sides of this divide will be hurt by it.

There’s something a little exciting about the idea of Harry and Meghan striking back against the royal family as a big bad institution that left them in harm’s way for so long. But asserting, even coldly, their independence from the royal family isn’t the same thing as waging war, and it hurts this family to pretend otherwise.