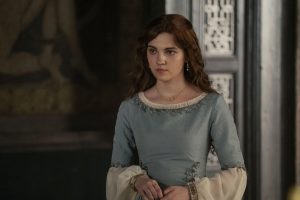 House Of The Dragon is finally here and as well as the usual blood and gore, one unlikely scene has stuck out for a lot of women.

Warning: this article contains spoilers for House Of The Dragon episode one.

Sex, blood, violence, gore – Game Of Thrones fans know what to expect from the fantasy series franchise by now. And to be honest, House Of The Dragon lived up to expectations.

As well as beheadings, one hell of a brutal childbirth scene and, of course, sex in pleasure houses, House Of The Dragon’s first episode also provided us with an unexpected nugget that has quickly become the talk of the premiere.

We know, we know. Your mind has likely turned to Queen Aemma’s horrific caesarean section scene but, perhaps in a bid to try and erase that moment from our minds, we found ourselves honing in on Alicent Hightower (Emily Carey) throughout episode one.

For now, we know her to be the well-meaning daughter of Otto Hightower (Rhys Ifans), the Hand of the King. She reads history books to Princess Rhaenyra (Milly Alcock) and they share moments of teenage female friendship that many of us can relate to. While we won’t say much about how her character progresses in the series, in episode one, she continued to do something that has resonated with a lot of women: nervously picking at her cuticles and nails.

House Of The Dragon: a definitive guide to the major characters in the Game of Thrones prequel

We see it first when the heir’s jousting tournament is underway and, being a young witness to heads being bludgeoned by axes and brutal beatings going on below the royal stand, Alicent watches on with furrowed brow. But it’s only when the camera pans down to her lap that we see her furiously picking at the skin around her nails, causing them to bleed.

It’s a brief moment in among a montage of more bloody and brutal scenes, but even when I  watched the first episode in a room full of people, it was this small segment that caused many to wince the most. Perhaps it’s the idea of self-inflicted pain that proves slightly more painful to watch, but it’s also a common disorder that many people live with and can relate to.

Dermatillomania is a skin-picking disorder where you cannot stop picking at your skin. According to the NHS, a person who has dermatillomania can’t stop and will cause cuts, bleeding or bruising to their skin; however, they often don’t realise they’re doing it. Most commonly, the disorder manifests itself during times of stress or anxiety and the skin picking is usually done with fingers, fingernails, teeth or other tools such as scissors and tweezers.

House Of The Dragon: Emily Carey stars as the young Alicent Hightower.

Sky’s House Of The Dragon episode 1: 7 talking points from the new Game Of Thrones prequel series

It’s not something I ever thought would be included in an episode of House Of The Dragon, but it’s something I’ve done since I was young and in primary school. Whenever stressed or anxious, it’s almost guaranteed that the sides of my fingers and cuticles will be the target of mindless picking. I’m not always wholly aware I’m doing it until a glance down at my hands reveals skin that is red, raw and often bleeding.

Like Alicent, it’s almost like you’re in a trance when the picking takes place and, indeed, later on in the first episode, her father has to tell her to “stop that”. It’s an exact scene that has played out in my own childhood but, of course, in this context, it is after Alicent has been urged to “comfort” the King. So, the stress is indeed warranted. Once her father tells her to visit the King, she immediately puts her thumb in her mouth and bites down so audibly that he has to command her to stop.

Even when she goes to the King’s chambers, she may be holding a book to read to him, but her fingers work quickly and subtly, continuing to pick at her nails. And it’s part of Alicent’s character trait that many female viewers have picked up on.

Did we think we’d relate to a scene in House Of The Dragon so much? Definitely not.

The small detail really was a “blink and you may miss it” moment.

But it still made many viewers have a visceral reaction.

Episodes of House Of The Dragon will be released weekly every Monday at 2am and 9pm on Sky Atlantic, and they will also be available to stream on Now with an entertainment membership.