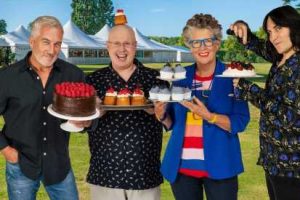 The show’s comfort viewing status has reached new heights with its latest season, filmed within a coronavirus bubble and with a familiar format, sans social distancing.

LONDON — Soon after Prime Minister Boris Johnson’s recent televised announcement of new coronavirus restrictions, a man who looked very like the prime minister stood in front of a very similar lectern on one channel here.

“We are saying, in regards to baking, if you must bake in a tent, bake in a tent, but please don’t bake in a tent,” said the impersonator wearing a messy blond wig, Matt Lucas, mocking governmental restrictions often criticized by the British public for being confusing and contradictory. Lucas, in his new role as a host of “The Great British Baking Show,” then asked two “experts” to settle a debate that has divided Britain for decades: the right way to pronounce scone. 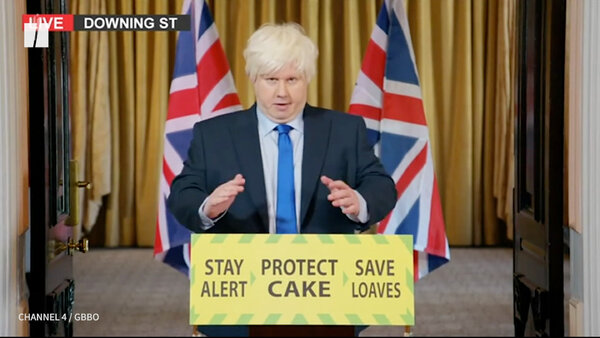 A reactive political sketch like this may be par for the course on a show like “Saturday Night Live!” but as the opening to the season premiere of “The Great British Baking Show” (or “The Great British Bake Off” as it is known in its home market), it evidenced the beloved show’s evolution during the decade it’s been on the air.

While many shows feel tired as they approach 100 episodes of the same formula, “Baking Show” has managed to balance its status as the “ultimate comfort show” with increasingly quirky elements like Lucas’s coronavirus briefing sketch to avoid getting stale.

Since its premiere in 2010, the competition show has twice gotten new hosts, once had a judge replaced and has changed networks (controversially, from the ad-free BBC to the commercial Channel 4). And yet, its structure — three baking challenges per episode, completed inside a tent in the grounds of a British country house — has remained unchanged, even in the current season, which was filmed during the summer, when the U.K. was in lockdown.

“Baking Show” remains one of Britain’s most popular programs, and nearly 11 million people watched the first episode of the new season last month, Channel 4’s highest rating since 1985. A Netflix distribution deal has given the show an appointment-to-view appeal in the United States, with episodes dropping only three days after they air in Britain.

“It is a television series, but we always try to think of it as an event, almost like a Wimbledon, or an Olympics,” said Richard McKerrow, the co-creator and executive producer of “Baking Show,” in a phone interview.

Always eagerly anticipated, the new season of “Baking Show” this year provided a welcome return to some version of normality at a time when television, and life, feel anything but. Most new television shows have had to adjust to social distancing, or have simply delayed production. But “Baking Show” looks and feels the same, returning to screens only a few weeks later than expected. It was filmed in “probably one of the biggest bubbles in the U.K.,” according to Hollywood — contestants and crew isolated for nine days before filming began and were tested for the coronavirus multiple times. During the weeks of the competition, bakers were permitted to return home only when they left the show.

This meant that the large crew could work safely within the relatively small space of the tent. It also meant bakers could still help each other through crises and Hollywood was able to offer bakers a handshake, arguably the highest praise on “Baking Show.”

“Me and my friends were actually a lot more excited to watch it this year because it was something that was quite normal,” said Leo Meaney, a London-based project manager and “Baking Show” fan, in a phone interview.

“I think there was a yearning to get back to normality, and the ‘Baking Show’ was the comfort blanket,” said Hollywood.

This doesn’t mean that the current season has been without criticism. In the first “showstopper” challenge of the year, the bakers had to build cake busts of their favorite celebrities, which saw a convincing David Attenborough and a haphazard impression of David Bowie. Some viewers felt that the challenges were getting increasingly wacky and far away from testing the contestants’ baking skills.

“Me and my friends were going, ‘No, how is that even physically possible, to make a bust of someone that inspires you?’” said Meaney.

For this season, one of the show’s hosts, Sandi Toksvig, was replaced by Lucas, who had recently been embroiled in a controversy surrounding the use of blackface in his previous TV show, “Little Britain.”

There has been far less criticism, however, than there was of the 2019 season of “Baking Show.” Last year, complaints about cruel judges and overly complicated challenges, as well as the removal of two popular contestants in a surprise double eviction, led many viewers to feel the show had lost its way.

McKerrow accepts the criticism as valid: “I think we would hold our hands up and say, last year’s show could have been better and that’s why an enormous set of effort has gone into addressing that,” he said.

This year, as in the past, the bakers offer a picture of Britain’s diverse population. Watching is like “supporting your favorite team in the Premiership, you support your baker,” says Hollywood. Bakers also become beloved for their quirks. Henry Bird, a contestant from the 2019 season, developed a following for wearing a shirt and tie each episode despite being a student, while Rowan, who was just evicted from the show, became a favorite for continuing to drink tea during stressful moments, as well as for his elaborate waistcoat collection.

And while some bakers have gone on to have established media careers, such as the Season 6 winner Nadiya Hussain and the Season 8 favorite Liam Charles (now a judge for the junior version), many of the bakers return to their previous lives, a rarity on reality television.

“I think what made it brilliant in the beginning was that you found people who cared more about the baking than they did about being on television,” said McKerrow, recalling that in the earliest days of filming, he looked around the tent and noticed the bakers were not getting distracted by the cameras. As the seasons have progressed, he’s seen a lot of people “who possibly are trying to be in the show as TV wannabes, and we’re so trying to make sure that doesn’t happen.”

“Baking Show” has returned as many people in both Britain and the United States have been baking their way through lockdown. For the five months she was unable to see her grandchildren, Jackie Heaton baked with them virtually. “It was just a godsend for me,” she said in a phone interview. Now that the “Baking Show” is back, so is the bake-along group Heaton helps run on Twitter. “It’s really good that they are actually doing what a lot of us are doing at home,” she said of the new season.

During the lockdown, like many, Hollywood turned to making banana bread. Seeing so many people online baking made him realize that it “has always been part of the DNA of the U.K.”

“It’s part of what the British are, we are good at baking,” he said. “International Bake Off, that’s what I say. Challenge them all.”