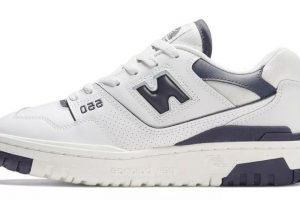 New Balance has essentially made the 550 their version of Nike’s ever-popular Air Force 1 Low: a go-anywhere, do-anything, low-top basketball-turned-lifestyle sneaker that’s available in a masterful myriad of colors. It’s gone from an exclusive collaborative centerpiece to a widely available and wildly popular in-line release, and in September it’s set to keep the ball rolling with three new color schemes: white and navy, a white and Carolina blue and a classic white and grey.

All three of these pairs look familiar upon first glance, and for good reason. They’re all similar to past releases but differentiate themselves with slightly-altered colorblocking. The navy pair is nearly identical to a style that was released in June 2021, but discards the suede mudguard of its predecessor in favor of a full leather build. In the same vein, the Carolina blue-embellished pair is similar to a popular past drop but does away with black accents for a more straightforward two-tone look. Meanwhile, the white and grey pair is a dead ringer for a past white and grey release, with the only difference provided by a color change on the collar overlay.

Release dates for this trifecta of 550s have yet to appear, but they’re likely to touch down in September. When they do, each should be priced at $110 USD.

If New Balance’s runners are more your speed than their hoops shoes, be sure to have a look at a new colorway of the popular 2002R “Protection Pack.”
Source: Read Full Article