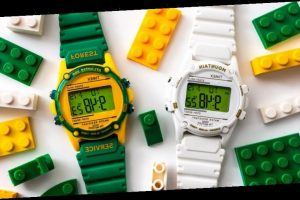 Timex is bringing back its retro-styled Atlantis Nuptse for a walk down memory lane.

Designed specifically for the Japanese market, the original Atlantis was launched back in 1985 and later arrived stateside in 1911 under the name Expedition. The new line adds the word “Nuptse” to its name — a combination of the words “west” and “peak” in Tibetan — and is offered in a massive range of vibrant colors as a nod to traditional Himalayan garments, including models pairing green and yellow, red and lime green, and a pure white edition.

As for its technical specifications, the watch’s resin case measures in at a wrist-friendly 40mm, and the entire timepiece weighs just 27 grams including the resin strap. A digital LCD sits squarely in the center and features the brand’s own Indiglo backlighting for greater functionality in dark environments, while a water resistance of 100m protects the watch from any moisture you’ll encounter during your daily adventures. The quartz movement itself provides time, date, timer, alarm, second time-zone, and chronograph functions, all controlled via pushers on the outside of the case.

As a Japan-exclusive, the Timex Atlantis Nuptse is currently retailing for ¥8,800 JPY (approx. $85 USD).