The generosity of Stephen A. Schwarzman, the Wall Street financier and philanthropist, is evident in many places at the New York Public Library’s flagship building on Fifth Avenue.

Some of them are the five spots on the landmark building’s floor and stone exterior where Mr. Schwarzman’s name is inscribed, courtesy of his $100 million gift to the library system in 2008.

Now the library plans to carve his name onto the Stephen A. Schwarzman Building for a sixth time.

It will go next to a new entrance on West 40th Street, which is in keeping with an agreement the library made at the time of that gift.

Still, when it comes to Mr. Schwarzman and his donations, it’s never quite as simple as just etching in the name.

“It is silly and it is too much signage for a single benefactor,” said Layla Law-Gisiko, the chairwoman of the landmarks committee for the local community board, which was informed of the planned changes to the library building. “Having the name so many times is crass.” 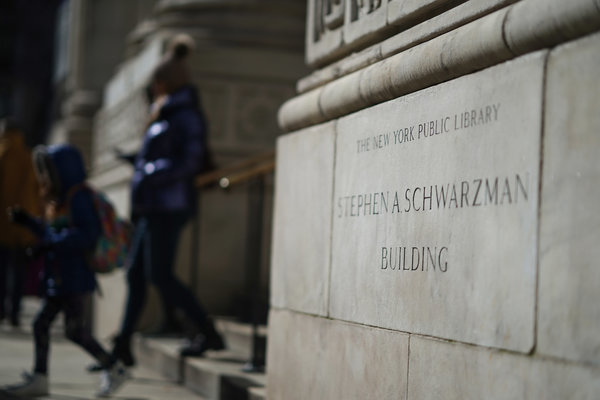 Last year in Abington, Pa., where Mr. Schwarzman pledged $25 million to his old high school, critics took umbrage when education officials initially agreed to recognize the gift by, among other things, renaming the school Abington Schwarzman High School, displaying a portrait of Mr. Schwarzman inside and naming other spaces for two of his brothers.

There have also been smatterings of criticism in New Haven, soon to be the home of the Stephen A. Schwarzman Center at Yale University, his alma mater ($150 million), and in Cambridge, Mass., where plans are underway for the M.I.T. Stephen A. Schwarzman College of Computing ($350 million). Some students and faculty members took issue, among other things, with Mr. Schwarzman’s association with President Trump, for whom he has served as an adviser.

At the library in Manhattan, the new bit of signage, less than three inches high, would be only one part of an expansive set of modifications to the building being reviewed by the city’s Landmarks Preservation Commission. But the proposal drew some criticism at a commission hearing on the larger plan last week.

Two of the 11 commission members, Adi Shamir-Baron and Michael Goldblum, joined three people from the public in questioning the new inscription.

“I personally think that the signage is excessive,” said Mr. Goldblum, adding, “but I don’t think that in its context it’s inappropriate.”

Mr. Schwarzman, the co-founder and chief executive of the Blackstone Group, a private equity firm, declined to comment. In 2008, his spokesman said it had been the library that proposed adding his name to the facade. His staff said that in Pennsylvania, it was Mr. Schwarzman’s devotion to education that drove his donation to the school district. The district ultimately dropped plans to rename the high school but agreed to name the school’s science and technology center after him.

The New York Public Library’s ornate, Beaux-Arts building, designed by Carrère and Hastings and completed in 1911, also features the last names of John Jacob Astor, James Lenox and Samuel Tilden, whose contributions were essential to its creation. They are writ large and high atop the facade, but are featured just once.

In the case of Mr. Schwarzman, whose gift buoyed a $1 billion plan to renovate the Fifth Avenue building, expand the library’s online presence and open new facilities, the library promised to include his name at every entrance. A spokeswoman for the library said that adding Mr. Schwarzman’s name again is appropriate “to both honor that 11-year-old agreement and properly identify for visitors the two-block-long building by adding the building’s name” to the new door.

Ultimately the landmarks panel’s role is not to approve the content of planned inscriptions but to evaluate their size, location and method of installation as part of a broader review of the proposed changes to the city-owned landmark, including a new plaza.

Few anticipate any real problems for the inscription. The panel’s chairwoman, Sarah Carroll, said at the hearing that adding it on West 40th Street seemed in line with the signage approved at the other entrances to the building.

Even Mr. Goldblum, who called it “unfortunate,” suggested that the additional signage was understandable.