Home » Entertainment » To Migos, Jewelry in Hip-Hop Is a Symbol of the American Dream

To Migos, Jewelry in Hip-Hop Is a Symbol of the American Dream 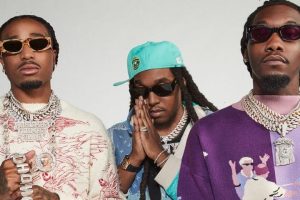 Whether it be iced-out chains with customized pendants, diamond clustered tennis necklaces, bust down Audemars Piguets or four karat rose-cut diamond earrings, jewelry has long been used as a symbol of success in hip-hop music. To the artists that sport these opulent pieces, it’s not only a fashion statement, but also a celebration of how far they’ve come and a testament to how they have actualized the American Dream.

HYPEBEAST chatted with Quavo, Offset and Takeoff ahead of the release of Ice Cold’s debut episode to discuss their favorite chains and how the ornamental pieces have become a tool for defining their own notions of success.

HYPEBEAST: How did the series come about?

Quavo: We just felt like it was very important to the culture to understand the diamonds and the jewels.

Offset: But in the knowledge that we know and the knowledge that comes with it. There are a lot of misconceptions about jewelry and wasting money and all that, but there’s a lot of positive aspects that people don’t talk about. So we want to lay that out and let people know what it means to the culture of us Black people, hip-hop and the world.

Q: It talks about the American Dream. Especially coming from inner cities, projects, nothing. When you’re looking up to the wrong influences. Kind of, like, showing where we came from and showing that it’s hard, but you put jewels on to talk about the trophies and it makes you feel like somebody.

What specifically do you all want the series to showcase?

How has hip-hop and rap’s emphasis on jewelry redefined what the American Dream means to us?

Jewelry in hip-hop culture is sometimes viewed as gaudy or even over the top. What’s your take on that?

Q: I feel like it’s an appreciation for us. As kids, we always like things that are shiny. We always like things that are bright. Coming from nothing and just showing that, people don’t understand the struggle and that’s what I think the documentary is about, because people still look at us from the outside looking in, thinking that it’s over the top or outrageous. That’s what the point of this Ice Cold documentary is about, just letting them know how much it means. They’re really significant and mean something to hip-hop and Black culture.

Your jewelry is like a passport. The first episode talked about how it shows where you’ve been and what you’ve accomplished. So how does this all connect to where you guys came from and all the success you’ve amassed thus far?

What is your most expensive chain?

Do you guys come up with your own ideas for jewelry?

T: We use our brains and our creativity to come up with these things.

O: So they’re real relatable to us.

T: We want to bring back the old creativity pieces. Back in the day, the big pieces, the meaningful pieces, so we’re bringing that back with our style on it.

Q: Also through the lyrics, what we rap about. (He goes on to mention several of the group’s own song lyrics that have inspired his jewelry pieces.) I was “Space Coupe Quavo Yoda” when I got the Yoda piece. With my Ratatouille piece, I was “Quavo Huncho Ratatouille” on “Bad and Boujee”. For the Crash Bandicoot piece, I’m a ’90s baby and that was one of my favorite games.

T: Even with this one right here [points to Jesus chain] we keep God first. I got my grandmama name on the back of that one, so that’s a significant piece. It means a lot. So when I put that on, God is with us all the time and she is with us watching over us. Every piece means something.

In your most recent music videos (“Modern Day,” for example) you guys love to flex elaborate chains and iced-out sunglasses. How has jewelry become a part of your personas?

O: I don’t think it’s part of the persona. It’s not a persona like you trying to flex on anybody. It’s like trophies. Awards that you wear around everywhere you go for your personal needs, not for anyone else. Like, when I look at my wrist right now, it’s just my hard work.

T: It reminds you of how far you came, how much blood, sweat and tears and countless hours [went into it]. Mistakes and just perfecting your craft. Look at your trophies and that’s just a sign like, ‘I did this. It’s possible. Look how far I came.’

What was the process of creating your last album like?

O: Patience, and just a lot of making sure we made good decisions on productions with these songs and making sure we give the people what they was asking for. Our main thing was coming up with a classic project, not just a hit single, or two or three. We wanted to come up with a solid project, because it was the end of the trilogy and Culture albums, it meant so much to hip-hop, and music. So we had to solidify that last chapter of the trilogy and stamp it and come out with a full masterpiece.

T: I mean, just had to make sure it was good. Because then again, like my brother said, it took time and it’s been a long time since we put out a project so the game was missing the boys. At the same time, give them our best, a good body of work, not just a project.

What’s next for you guys?