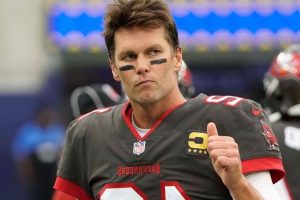 Amidst the Antonio Brown debacle that occurred earlier this week that saw the wide receiver storm off the field and subsequently “no longer part of the Bucs.” The event sent shockwaves throughout the NFL, as the outburst was unexpected.

Tom Brady, the quarterback for the Tampa Bay Buccaneers, took his Let’s Go podcast detailed how he felt about the situation, reflecting on the situation with Brown and explaining the humanity of football. Brady said, “You don’t necessarily know what other people are going through and all is you do is you show up to work every day and you try to do your job.” He continues to state that he has built strong relationships with his teammates over the years and that he would do what he can to help them, “I care about people beyond the football field as well.”

He doubles down on how Brown’s exit is a “difficult situation that everyone is dealing with.” Brady urges fans to be more empathetic adding, “We used to think that we were robots out there and we’d go out there and play and it’s more than that now. There’s a humanity to everything that we’re doing out there.”

Take a look at the conversation below.

In other sports news, Russell Westbrook is developing a documentary on Black basketball athletes before the NBA.
Source: Read Full Article