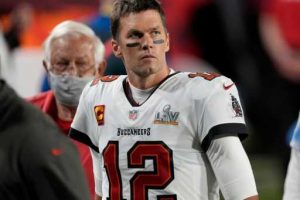 It’s no secret that Tom Brady is a legendary MVP, and his switch from longtime team the New England Patriots to the Tampa Bay Buccaneers has shaken up the NFL scene. What you may not know, however, is just how handsomely Brady is rewarded for his superstar efforts on the field — and just how much of a payout he’s guaranteed if he clinches a 2021 win against the Kansas City Chiefs. Even if Brady walked away with a Super Bowl loss, he’d still be the highest-paid player in this game, and that’s got to bring a certain degree of confidence to his play.

Per ESPN, Brady is due to receive a whopping $500,000 if the Buccaneers come out on top tonight, which would be on top of $1.25 million the athlete has already collected in incentives from his new team for winning various games.

According to Sportrac, though, that payout won’t make the difference in Brady’s salary ranking, which comfortably sits him at the no. 1 highest-paid player on the 2021 Super Bowl field. Per their records, he signed a two-year contract with the Buccaneers for $50 million, setting his annual salary at $25 million. There’s also a cap on those incentives he’s been cashing in on — after earning $2.875 million in extras, he’s tapped out for the year.

Given that Brady and wife Gisele Bündchen just dropped around $17 million on a new home site in Florida, we know at least one person who will be cheering for a win. With the tremendous risk that football players are taking on the field, we hope that fair pay (and excellent healthcare) is always part of the deal.

Before you go, click here to see every Super Bowl halftime performer since 1993.