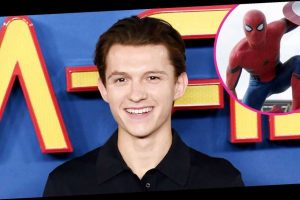 His lips are sealed! Tom Holland didn’t give anything up when asked about possible cameos in Marvel’s highly-anticipated Spider-Man 3.

The British actor, 24, sat down with Variety to discuss the film in a Thursday, February 4, interview. Asked whether Tobey Maguire or Andrew Garfield — both of whom previously portrayed the web-slinging superhero — may appear in Spider-Man 3, Holland kept coy.

“I met Andrew once, I met him at the BAFTAs. He was lovely. He was a really nice bloke and we had a nice chat. It was quite soon after Spider-Man: Homecoming had come out. He was really positive and nice,” the Cherry star recalled, adding that he “bumped into Tobey a few times at different parties in L.A.”

As for whether they’ll appear in the upcoming Marvel movie, which has yet to be named, Holland said in his Variety interview, “If they are, they haven’t told me yet. That’s something Marvel would do. ‘So, that’s who that tennis ball was!’” He noted that he hopes Maguire, 45, and Garfield, 37, “enjoy our movies.”

Calling Dibs! Stars Reveal What They Took From Movie and TV Sets

While Holland wouldn’t give much away about Spider-Man 3, he did tell Variety that he anticipates the film will be “the most ambitious standalone superhero movie ever made.”

He added: “We got a lot more shooting to do. We started before Christmas and shot for like seven weeks. We stopped for the Christmas break, and then we’re starting again. I’m just as excited as everyone else to see it, let alone be a part of it.”

The Avengers: Endgame star isn’t the only Spider-Man 3 star being asked about Maguire and Garfield. Holland’s costar, Zendaya, fielded questions about their potential appearances in December 2020 during an appearance on Jimmy Kimmel Live! and she was quick to shut it down. The Euphoria actress, 24, who played MJ in Spider-Man: Homecoming and Far From Home, told host Jimmy Kimmel, “I can neither confirm nor deny.”

Filming for Spider-Man 3 started in October 2020 after being delayed because of coronavirus. Holland revealed that he arrived in Atlanta to begin working on the project in a series of Instagram Story videos shared at the time. “It’s time for Spider-Man 3,” he said in the clip. “Let’s go!” Jamie Foxx, who played Electro in a previous Spider-Man film, is set to appear in the comic book-based film, according to Entertainment Weekly. Jake Gyllenhaal, who faced off with Holland as Mysterio, will also reprise his role.