Toning Down Asian Stereotypes to Make ‘The Nutcracker’ Fit the Times

When Marie and her Prince visit the Land of Sweets in Act II of “George Balanchine’s The Nutcracker” — the New York City Ballet holiday tradition that begins its annual run at Lincoln Center on Nov. 23 — they encounter the Sugarplum Fairy and Candy Canes, as well as Hot Chocolate from Spain, Coffee from Arabia and Chinese Tea.

In an era of increasing sensitivity to cultural stereotypes, the Chinese Tea segment — with its pointy finger movements, rice-paddy hats and a Fu Manchu-type mustache for the male dancer — had begun to seem offensive to audiences, as well as to some members of City Ballet.

“I struggled internally with being cast in Tea as a person with Asian heritage,” said Georgina Pazcoguin, a City Ballet soloist who is part Filipino. Because it’s a featured role in a marquee ballet, Ms. Pazcoguin said she was excited to have the exposure but “never felt quite comfortable with the depiction of the culture.” 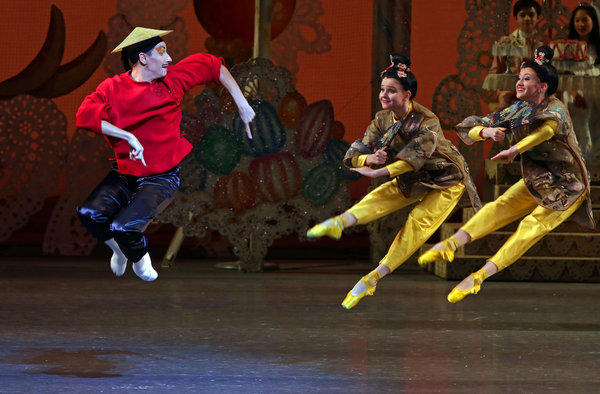 Last year, New York City Ballet modified the choreography, costumes and makeup. And, just last month, the Balanchine Trust, which owns the rights to Balanchine’s work, notified other ballet companies that the changes were an approved option, though not required.

“There is a different sensibility with regard to these issues, so we wanted to respond,” said Ellen Sorrin, the Trust’s director. “We are not demanding that companies do this; we’re making them aware that these are concerns.”

These adjustments are part of a broader effort to re-examine how people of color are portrayed in the performing arts and how classics with potentially troubling aspects can be made acceptable to modern audiences. In 2015, the Metropolitan Opera eliminated blackface from its “Otello.” The Bolshoi has toned down a segment of its “La Bayadère” featuring white children in blackface, but it has been criticized for not going far enough. And more recent fare has also been revised: The musical “Cats” dropped a song in which characters sang in Asian accents.

“I see what’s happening at the Balanchine Trust as part of a larger movement in the arts to address entrenched cultural narratives that undermine tolerance, fairness and inclusion,” said Lane Harwell, a program officer at the Ford Foundation, who previously served as the founding executive director of Dance/NYC, a service organization. “Any resistance is just because change is hard, but performing arts are not a static form, and continual interrogation and reinterpretation keeps historical work relevant.”

There has been some pushback from purists who argue against altering a work of art in response to changing times — and there is particular sensitivity surrounding Balanchine, whose “Nutcracker” is a widely cherished tradition. But, for the most part, ballet companies around the world seem to be on board.

Several have signed a “Final Bow for Yellowface” pledge, created by Ms. Pazcoguin and Phil Chan, an arts administrator and former dancer. The pledge is a commitment by the dance world “to eliminating outdated and offensive stereotypes of Asians (Yellowface) on our stages.” Signers include companies that dance other versions of “The Nutcracker” like the Royal Ballet in London, the Washington Ballet, the Louisville Ballet and Ballet West.

“Diversity onstage is paramount these days,” said Adam Sklute, the artistic director of Ballet West. “I want to populate my stage with the kind of world I want to live in, which is culturally diverse.”

When Mr. Sklute took over Ballet West about a decade ago, he was immediately troubled by the “Tea” section in the company’s “Nutcracker,” one of the oldest full productions in America, choreographed by Willam Christensen. “There was a lot of head-bobbing and parasol-swirling, smiley-faced action,” he said. “This was something that in 1944 would not have been considered inappropriate, but when I looked at it in 2007, I thought this isn’t right.”

He went to the Christensen family, which own the rights, and asked to borrow from the San Francisco Ballet’s version, which features a Chinese warrior fighting a Chinese dragon. “I felt like it was much more a celebration of the culture versus a mockery of the culture,” Mr. Sklute said. “I have not received a single complaint.”

“Clearly this is an issue we have to have on our radar,” Mr. McKenzie said.

“The Nutcracker” is not the only ballet that is ripe for revision, though others may be more challenging to address with only nips and tucks, like “Le Corsaire,” which features caricatured depictions of people from the Middle East, and “La Bayadère,” which suggests that Indian dancing girls become white ballerinas when they go to heaven.

But the changes to City Ballet’s production are sending an important signal. “Here’s this institution, ‘The Nutcracker,’ and we’ve just made a positive step to bring it into the 21st century,” Mr. Chan said. “This is something that has felt so immovable — so untouchable and ingrained in our culture — it feels like changing the plié.”

Having received some complaints from audience members about “Tea,” Peter Martins, then ballet master in chief, met with Mr. Chan before last year’s “Nutcracker.” Mr. Chan, who is part Chinese, said he talked about watching a revival of Mr. Martins’s “Magic Flute” as a young boy, which features an Asian servant who is the butt of jokes and “feeling like everyone was laughing at me.”

“I couldn’t bring myself to go back to City Ballet for a few years after that,” he said. “Which is not fair, because Balanchine belongs to me, too, and I felt like I wasn’t welcome.”

City Ballet’s changes to “Nutcracker” included omitting the mustache and the wide hat; toning down the eye makeup on the man; replacing the geisha wigs with a headpiece on the two women; and modifying the shuffling and bowing choreography, with more generic hand gestures in place of the pointy fingers.

“It was looking like a caricature and enforcing some negative stereotypes,” said Jonathan Stafford, the leader of City Ballet’s interim artistic team. “We’re kind of in the middle of an evolution right now, a new cultural awareness.

“While we need to maintain the integrity of the original, we also need to make sure it works for today’s audience,” he added. “We don’t want people walking out offended.”

There have not yet been changes to the “Coffee” portion of “Nutcracker,” which features a woman in a shimmering gold bra and flowing headpiece. Ms. Pazcoguin, who will dance Coffee at the opening performance, said she hoped the yellowface.org effort would “not only educate about Asian culture but have more people ask questions.” Mr. Stafford said Coffee was “something we need to look at this year.” Similarly, the company made an adjustment last spring to “Coppélia,” changing the “Chinaman” part to “the Fortune Teller.”

In addition to the pledge, yellowface.org includes resources like suggestions for alternative choreography and makeup.

“In the same way that blackface is limiting and degrading to African-Americans, continuing to present a 19th-century view of Asians does not allow for character nuance for Asian-American dancers today,” Ms. Pazcoguin and Mr. Chan say in a letter on their website. “If all audiences see is the bobbing and shuffling coolie from a bygone era as the only representation of Asians onstage, what message does that send to our Asian students who dream of dancing the Swan Queen?”