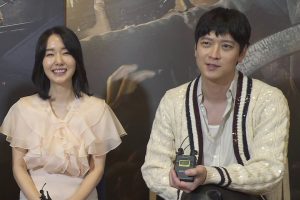 SINGAPORE – The cast and director of zombie movie Train To Busan: Peninsula would like to welcome everyone back to reopened cinemas, but they add a note of caution.

Director Yeon Sang-ho, 42, says: “Peninsula is meant to be seen in theatres, but it should be seen safely.”

The film is poised to be a hit around Asia, not just because it is the highly anticipated follow-up to Train To Busan (2016), a movie that set a record for South Korean films in Singapore and around the world.

It is the first brand-name action movie to be released in theatres as most Hollywood films have been moved to August and beyond.

Actor Gang Dong-won (Secret Reunion, 2010), who plays ex-soldier Jung-suk, an escapee who returns to the zombie zone of the Korean peninsula to retrieve looted cash, recognises the opportune timing.

“Globally, the film industry is suffering a very difficult time… With Peninsula being in the box office as the first blockbuster, I hope that this will spark some kind of hope for the global film industry,” the 39-year-old says in an e-mail interview.

In the follow-up, which takes place four years after the events of the first movie, Jung-suk is among the many Korean refugees sheltering in Asian countries, where his countrymen are seen as diseased. The entire Korean peninsula, overrun by the undead, has been sealed.

Having lost everything he loved during the evacuation and treated like scum in Hong Kong, he is disillusioned with humanity. Then a triad makes him an offer: Lead a team of raiders into the hot zone, retrieve looted cash and begin a new life as a rich man in Hong Kong.

The movie is an ambitious departure from the first movie. Action scenes have been scaled up and a landscape of a city in ruins has been created.

Director and co-writer Yeon says he got the idea for using the first film as an origin story, then jumping off to a larger, more ambitious sequel even before he began shooting the first movie, which he also directed.

While scouting locations for Train To Busan, he hit on the idea of a sequel set in a desolate zone, a place where returning escapees are forced to confront not just danger, but survivor guilt.

“Train To Busan explored the fears of normal people facing an unknown virus. Peninsula has a different kind of horror. Jung-suk, after escaping the virus, has to face another kind of fear – exploring an unknown place.”

Another thing that has changed in four years is the growth of the digital effects industry in South Korea. Back in 2016, the more ambitious, large-scale scenes in Peninsula could not have been done effectively, says Yeon.

“When we first envisioned the storyline, we worried if this was even possible with Korea’s film industry because of the massive settings required. We doubted we could even create the look of a wasteland.”

But once production started, those worries proved to be unfounded.

He says: “We realised that Korea’s film industry has improved tremendously.”

Train To Busan: Peninsula is showing in cinemas.