After emphasizing the urgency of a new federal government report detailing the threats of climate change, Trevor Noah on Monday played a clip of President Trump saying he didn’t accept the report’s findings. Noah became exasperated.

“How can one man possess all the stupidity of mankind?” he said. Riffing on another news item from the weekend, in which a Chinese scientist claimed to have produced the world’s first genetically modified babies, Noah said about Trump:

“It’s like they edited his genes to give him superhuman stupidity. The scientists in the lab were like, ‘Well, what should we give him, superhuman strength?’ ‘No, that’s dangerous to society, no, no, no. Let’s make him really stupid, what’s the worst that could happen?’” — TREVOR NOAH

Then he turned his critique on the news media, lampooning journalists for focusing on estimates of how much damage climate change would do to the economy.

“I love how America always thinks about everything in economic terms. Like even when they talk about the end of the world, they say, ‘Climate change is going to kill everybody — and that’s going to cost us like a billion dollars!’” — TREVOR NOAH

Noah attacked networks like CNN for welcoming nonscientists with ties to the oil and gas industries to argue against the report.

“Where else would we accept this? If someone told me, ‘Hey Trevor, these test results say that you have cancer, but I’m not a doctor, I think you’re fine,’ trust me, I would not be like, ‘Oh, you’re not a doctor? Carry on, carry on. Tell me your thoughts on my health.’” — TREVOR NOAH

“Think of it this way: When Maury Povich brings someone on, if the DNA test says you are the father, then that’s it. The science has spoken. He doesn’t go, ‘All right, we’ve done the DNA test, but in your opinion, Lavar, why are you not the father?’ Because he knows dudes would be like, ‘Well, first of all, ’cause it’s expensive. And second of all, look at that baby’s head.’” — TREVOR NOAH

Fallon and the Silent Bard

Jimmy Fallon received a visit from Bob Dylan last week — but he didn’t get a single word out of the sphinxlike music legend. Instead, the two watched a private performance by the Big Apple Circus for just over a minute before Dylan disappeared mysteriously, leaving Fallon to wonder if he’d hallucinated the whole thing.

It was all a glorified commercial for Dylan’s new line of whiskey, Heaven’s Door. And apparently the singer appreciated the opportunity, because Fallon said on Monday’s “Tonight Show” that Dylan had surprised him with an act of kindness.

Fallon had expected Dylan to be taciturn, but said he turned out to be “happy and so charming.” And possibly telepathic.

Maybe Dylan had done some deep research on Fallon, or maybe he truly just sensed the affinity.

Fallon celebrated Cyber Monday with a few jokes at the expense of companies.

“Today is Cyber Monday. It’s the busiest shopping day of the year, and Americans spent billions of dollars online. Billions. Earlier today, I saw a U.P.S. guy hiding under his own truck and breathing into a paper bag. He was like, ‘I can’t do it!’” — JIMMY FALLON

“At Sears, the entire store was 50 percent off. Not the items — you could buy the actual store.” — JIMMY FALLON

Stephen Colbert took an extended holiday weekend off, but he will return on Tuesday, when he’ll be joined by Jon Stewart. (Jimmy Kimmel, James Corden and Seth Meyers will continue to air reruns.) 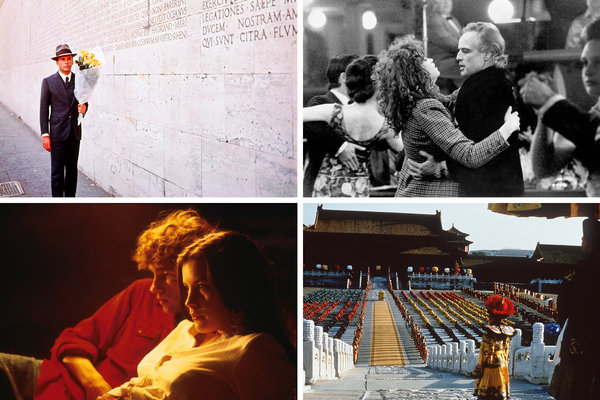 Here are the best movies currently available for streaming by the director Bernardo Bertolucci, who died on Monday.