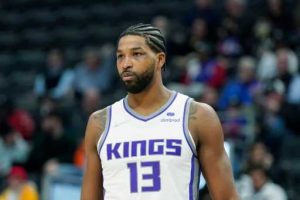 It’s about to be a dark day in the Kardashian household. What began as a Twitter rumbling  is slowly being solidified into cold hard fact as a new lawsuit against Thompson’s basketball team the Sacramento Kings sees the light of day. The lawsuit, filed by Texas-based personal trainer Maralee Nichols, alleges that she’s pregnant with Thompson’s child and requests paternity support, and the details don’t look good for on-off girlfriend and co-parent Khloé Kardashian. According to court documents obtained by DailyMail.com, Nichols claims she was in a months-long relationship with Thompson that resulted in her getting pregnant back in March, and with the baby now due on Dec. 3, she’s coming after the NBA player for support. While Thompson denies the details of what Nichols is alleging, any version of this timeline can’t be sitting well with Kardashian.

To briefly recap the long and winding road that is Thompson and Kardashian’s relationship: they first got together in September 2016, and welcomed their daughter True Thompson in April 2018, just days after Thompson had video footage released of him cheating on Kardashian with another woman. Nevertheless, they persisted — and Thompson was hit with more cheating rumors with Kylie Jenner BFF Jordyn Woods in 2019. Thompson and Kardashian parted ways, but not for long, stirring reconciliation rumors by 2020 that they confirmed early that year. In spring 2021, cheating rumors swirled again after the claims of influencer Sydney Chase, and Kardashian and Thompson split once again — but not before he allegedly began his affair with trainer Nichols.

According to documents obtained by DailyMail.com, Thompson admits to an affair with Nichols but claimed they only hooked up twice and spent a single night together — the night of his 30th birthday celebration back in March.

“Petitioner claims that she is pregnant with. my child and that she is due on December 3, 2021,” Thompson’s statement continues. “However, Petitioner does not know when conception took place and concedes that conception may have taken place in March or April 2021. However, Petitioner does not even recall one date in 2021 when I had sexual intercourse with her. Therefore, I do not know if her claims that I am the father of this child are supported by any facts.”

On Thompson’s March 13, 2021 birthday, Khloé Kardashian memorably posted a birthday tribute to him on Instagram, writing: “The ones that are meant to be are the ones who go through everything that is designed to tear them apart and they come out even stronger than they were before…Happy birthday TT! Welcome to 30!”

Before you go, click here to see all the celebrity couples who have stayed together after cheating scandals.