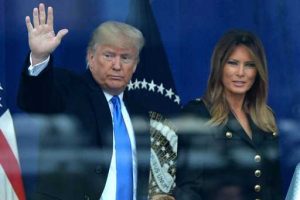 When the author of Melania and Me: The Rise and Fall of My Friendship With the First Lady, Stephanie Winston Wolkoff released her secretly recorded tapes of her conversations with Melania Trump, we knew the response from the Trumps would be less than pretty. Despite Trump releasing a statement of her own slamming the book as mere gossip, the Trumps refused to stop there. In October 2020, The Trump administration filed a lawsuit against Wolkoff and accused her of breaking an official nondisclosure agreement with her tell-all book. After months of litigation, the Department of Justice has finally dropped the lawsuit, per USA Today.

Melania and Me tells the story of Wolkoff’s falling-out with the Trump family. The author spent time working at the White House as an advisor and had a nearly two-decade long friendship with Melania. According to the outlet, the Trump Justice Department’s civil division claimed that Wolkoff, “violated her contract with the government by not sending a draft of her book to the White House for review and by not obtaining permission to write it, among other alleged misdeeds.”

Earlier this week, the Justice Department dismissed the lawsuit and Wolkoff took to Twitter to celebrate.

“Melania opened Pandora’s box involving the DOJ,” Wolkoff wrote. “The enormous trove of communications & documentations I possess and shared tell the true story about “why” and “how” the contracts were “created” and “terminated” and who was involved. TRUTH PREVAILS.”

She added in another tweet, “After 4 years of Trump’s tyranny against me with lies, defamation, emotional torment, constant lawsuits, subpoenas, and millions of dollars in expenses, I have proven Melania’s own ruthless actions and heartless words exposed the TRUTH (over falsehood) and JUSTICE prevailed.”

Why the Department of Justice had a change of heart is unknown, though USA Today noted that it is not uncommon for cases that are brought by one administration to be subsequently dropped by the succeeding one.

Wolkoff told the outlet in a statement that she felt the Trumps unconstitutionally used the Department of Justice as “their personal bulldog” that did their dirty work.

“As my lawyer previously has observed, this lawsuit was entirely meritless and represented an effort by the Trumps to enlist the DOJ to pursue entirely personal goals and interests,” her statement said. “Writing and speaking the truth is a fundamental American principle. The fact that the DOJ dropped this frivolous, bullying, anti-American case makes me feel like we are living in America again and not in some lawless dictatorship.”

Before you go, click here to see the most shocking celebrity tell-alls of all time.