Twyla Tharp, the Maximal Minimalist, and Her ‘Eight Jelly Rolls’

It took Twyla Tharp six years to get one of her dances on a proscenium stage, and what a dance it was: “Eight Jelly Rolls,” set to early jazz music by Jelly Roll Morton. The year was 1971; the stage was the Delacorte Theater at Central Park.

How did Ms. Tharp go from “Tank Dive” (1965), her first work ever, in which she spun a yo-yo and held a relevé to the Petula Clark recording of “Downtown,” to the exuberant “Eight Jelly Rolls”? The period in between was a time of remarkable invention. With Ms. Tharp at the helm, a close-knit group of female dance artists worked tirelessly, frequently in a farmhouse attic in upstate New York in the dead of winter.

When the opportunity did come for Ms. Tharp to create a work for a stage, she was ready to make “Eight Jelly Rolls,” a dance for six in eight sections. Her adventure, she said, was to define — or redefine — “What is dance?” “And because I wasn’t forced into a stage with wings and curtains and 30-minute pieces, I had to make up all of the definitions. We were completely independent. I learned how to do it.”

Although many may think of Ms. Tharp, 77, in relation to her work for Broadway and ballet, she started as an experimentalist who pushed boundaries at every turn. In “Minimalism and Me,” at the Joyce Theater for four weeks, beginning on Wednesday, Nov. 14, Ms. Tharp has put together a two-part program paying homage to those early years.

The first half, more a lecture than a performance — she thinks of it, she said, as an “illustrated monologue” — will feature excerpts from her earliest works; the second half is the reconstruction of “Eight Jelly Rolls,” for which Ms. Tharp has, for the first time, inserted men into two of the three leading parts, originally danced by Ms. Rudner and herself. 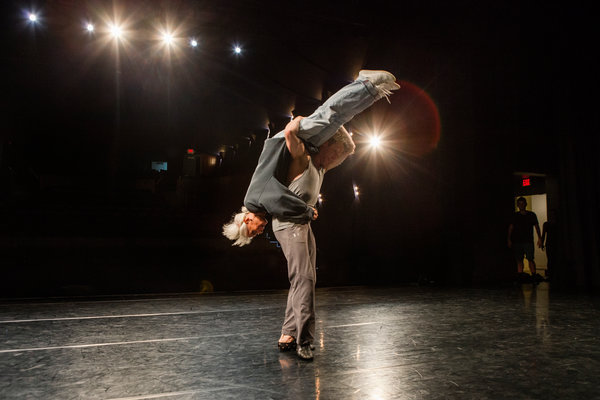 “Could I cast it with all women?” she asked about that decision. “Yes. Does that make it more ‘authentic’? I’m not sure about that.”

“We were perhaps not given all of the opportunities one might have liked, being women,” she continued, “but we now have the authority to recast this. We can be inclusive, whereas before we were exclusive.”

Her present company is small but mighty; for “Eight Jelly Rolls,” which was reconstructed by Ms. Tharp and Ms. Rudner, there are two casts. Reed Tankersley and Ron Todorowski will alternate in Ms. Rudner’s role, while Kara Chan and Matthew Dibble take on Ms. Tharp’s part; Kellie Drobnick and Mary Beth Hansohn will share the role originated by Rose Marie Wright.

“Eight Jelly Rolls” engages both Ms. Tharp’s technical and comedic sides, with movement so silken and perfectly timed that it seems to roll off the body. (One particularly slippery solo, originally for Ms. Tharp, is nicknamed “The Drunk.”)

“It looks very free and fun,” Mr. Todorowski said, but “it’s very structured, very specific and detailed.” The challenge, he added, is trying to find the balance that the original dancers found “and really listening to each other, because these women knew each other so well.”

The seeds of “Eight Jelly Rolls” were planted at Oberlin College, where a pregnant Ms. Tharp created “The History of Up and Down I & II” for her company and a group of students; the first part included music by Morton.

“Twyla worked differently with each one of us, and she asked us all to make 15 positions,” Ms. Rudner said of that time. “When I was in the studio with her, she looked at them and then made the transitions. If I took a step, she added a dip and then a little turn. Between the two of us, we were combining a sequence of activity that became the basis for the solo.”

In the solo, the third “Jelly Roll,” that material adds up to only about 30 seconds; to fill out the music, the dancer takes the base phrase and rearranges the movements in real time. Because of that, the solo is never performed the same way twice.

Mr. Todorowski doesn’t use the word “improvisation” to describe this process. But, he said: “The units are so ingrained in you that they’re just coming out based on what the music is telling you to do. You’re meant to be executing it as if you’re dancing by yourself in your room. There’s no audience. You’re meant to just get lost.”

The oppositional forces of order and chaos have always been important for Ms. Tharp, and in “Eight Jelly Rolls,” she illustrates them with its two groups of dancers: three leads and three others who make up the chorus. Because there are two casts during the run, the dancers will get to experience both sides of the piece’s exacting framework.

The other flavor in “Eight Jelly Rolls” is its humor. “I like shtick,” Ms. Tharp said. “And I can do falls. We were very physical, so it was, ‘Let’s do some physical clowning.’”

If “Eight Jelly Rolls” was a feminist statement, as Ms. Tharp has called it, it’s because men dominated clowning at the time. “I was like, ‘Wait a minute — I can do this stuff,’” she said. “That’s where ‘The Drunk’ came from.”

This summer, to prepare for “Eight Jelly Rolls,” the dancers learned the dance that Ms. Tharp made before it, “Torelli,” which gave them a foundation for the movement. Ms. Rudner referred to the process as “a Tharp boot camp.” Because the phrases in “Torelli” are altered during performance, that experience gave the dancers the chance to become comfortable with what Ms. Tharp referred to as “developing a wider channel” as performers.

“You know it really well,” she continued, “but you can move in, out and around it.”

Last year, Ms. Tharp reconstructed “The Raggedy Dances,” another early work; in the end, she said, there wasn’t enough time for the dancers to embed themselves in the movement. But this time, with the “Torelli” boot camp and because Ms. Tharp wasn’t working on a new dance, both Ms. Rudner and Ms. Tharp believe bringing back “Eight Jelly Rolls” is different. (Last year, Ms. Tharp was also creating a new work, set to music by Bob Dylan.)

“The more you do this, the more you realize what’s involved,” Ms. Tharp said of putting up an old piece.

Ms. Rudner said she also thought of dance “as creating dancers — and that the dancer learns from the challenges that are offered.”

“And Twyla was into learning and challenging us,” she added. “That’s how all those dances were made.”

Ms. Tharp insisted that she couldn’t bring back the past. “But I can bring back the essence of movement — where it came from, how it operated, what it was intended to do,” she said. “And in the case of ‘Eight Jelly Rolls,’ one of the biggest components is that we loved doing it. One of the things that people found interesting is that we were actually having fun, and it was still called dance.”

She paused for effect. “I like to think that’s still a possibility.”