Home » Entertainment » Tyler, the Creator Eloquently Breaks Down Why Grammys Voting Is Unfair After His First Win

Tyler, the Creator Eloquently Breaks Down Why Grammys Voting Is Unfair After His First Win 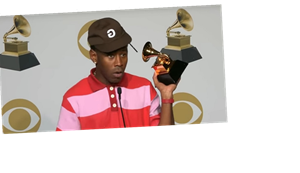 Tyler, the Creator may have nabbed his first golden gramophone at the Grammys on Sunday night, but he’s juggling pretty mixed feelings about the achievement. The 28-year-old artist had a momentous night at the award show, winning best rap album for Igor after taking the stage for a captivating, energetic performance, and he used his backstage interview as an opportunity to call out the Recording Academy’s unfair voting process.

“I’m half and half on it,” Tyler said of his initial reaction to scoring his first-ever Grammy. “On one side, I’m very grateful that what I made could be acknowledged in a world like this. But also, it sucks that whenever we — and I mean guys that look like me — do anything that’s genre-bending, they always put it in a rap or urban category.”