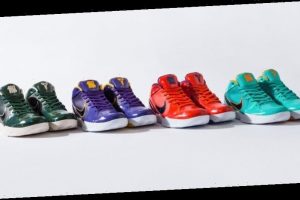 To pay further homage to the Black Mamba and his daughter Gigi Bryant, UNDEFEATED is revisiting its partnership with

The five-pronged capsule originally launched in August 2019 and featured four team-inspired colorways for elite NBA Swoosh members Devin Booker, DeMar DeRozan, Giannis Antetokounmpo and Kyle Kuzma — all players that Bean believed channelled the “Mamba Mentality”. A fifth “Black Mamba” offering also accompanied the drop, but it only saw an exclusive delivery via the Nike SNKRS app. First access for this specific makeup is being proffered to the LA community via a Nike SNKRS Pass.

Each take is crafted with an iridescent patent leather base, and come complemented with stark black Swooshes that rest on the lateral and medial panels. Branding is present on the tongues and splits between Kobe‘s logo on the right side and UNDEFEATED‘s signature five-strike badge on the left. On the heel cups, you’ll find them splitting between “8” on the left side and “24” on the right foot to pay tribute to his jersey numbers.

If interested in purchasing, the collection will be available on April 2, 2021 at 8:24am PDT via the UNDEFEATED online store. On top of the shoe release, The Undefeated Foundation will also be donating to the Mamba & Mambacita Sports Foundation in memory of Kobe and Gigi.