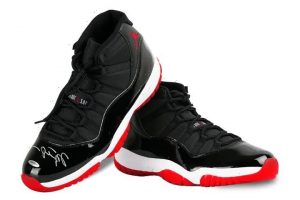 Memorabilia and trading card company Upper Deck has teamed with Michael Jordan to release a series of autographed Jordan Brand sneakers, the first of which will be 2019’s Air Jordan 11 “Bred” retro. Jordan has been an Upper Deck spokesperson for over 30 years, and the two’s release of a signed selection of Air Jordans aims to combat forgeries in the autograph market by providing memorabilia collectors with complete peace of mind.

The Air Jordan 11 “Bred” is an optimal selection to start the sneaker lineup with, as it’s one of the most iconic sneakers in Jordan’s line — and debuted during Jordan and the Chicago Bulls‘ run to their fourth NBA Championship. Many sneaker aficionados saw the 2019 retro as the closest re-creation of the OG 1996 “Bred” as well, thanks to details like its high-cut patent leather mudguard, ballistic mesh upper, detailed carbon fiber midfoot shank, icy red outsole and original box. Here, it’s presented in a size 13 US, signed in silver paint pen on the left toebox, and accompanied by a certificate of authenticity.

“Along with the increased excitement around autographed collectibles comes an increase in forgeries in the market,” said Jason Masherah, President of Upper Deck. “Collectors can have peace of mind when purchasing Michael Jordan autographed memorabilia from Upper Deck, as each autograph is witnessed and authenticated by an Upper Deck representative.”

Interested parties can head over to the Upper Deck webstore to view (or purchase) the shoes, which are priced at $24,999.99 USD. More signed styles will arrive in the coming weeks as well.