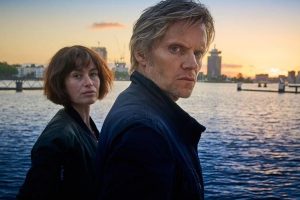 The rebooted Van der Valk was a lockdown TV success back in 2020 and now, after some delays, the second series is finally due back on our screens. Here’s everything you need to know about it.

Now, it may be hard but cast your mind back to April 2020. We know, it’s not the easiest or most fun time to remember, but at least we had the comfort of TV to get us through the long lockdown period and the chance to catch up on all our favourite shows.

While the pandemic caused many series and films to grind to a halt, there were some releases during that time that carried us through those long evenings. As well as hit shows like Normal People, The Queen’s Gambit and Bridgerton, one ITV detective show came out the woodwork and surprised us all.

Van der Valk may be recognisable to many as it’s the reboot of the popular 70s detective drama of the same name. The first series aired back in April 2020 and was inundated with praise over its tense, nail-biting episodes. So much so, it was commissioned for two more series almost immediately after it had aired. Now, the second anticipated series is coming to our screens this week – after some Covid-induced delays – and here’s everything you can expect from season two of Van Der Valk.

What is the plot of Van der Valk season 2?

The premise of the series is relatively simple: a Dutch detective – Van der Valk – dedicated in tackling crime on the streets of Amsterdam. Like any good crime drama, each episode focuses on a new case that is altogether more gritty and fast-paced as the last.

The new series sees the crime-fighting duo tackle similar grisly murder cases and the first episode is set to open the new series with a bang. According to its synopsis, the first episode revolves around “a game of cat-and-mouse, and at its core is a battle for the soul of Amsterdam”. In it, Van der Valk is tasked with investigating “the gruesome murder of Susie De Windt, a solicitor whose mutilated body is discovered strung up on a windfarm with an ‘X’ carved into her stomach and a cryptic note inside her coat”.

Like we said, grisly – so this is definitely not one to watch over dinner. At the end of the first series, we also learnt of the shocking death of Van der Valk’s wife Arlette, who drowned after a car accident. This new series is set to also explore his blossoming new relationship so at least we have some romantic respite in amongst the gripping crime of the series.

Who will star in Van der Valk season 2?

When and where will Van der Valk season 2 be available to watch?

Think of the new episodes much like films, as there are only three episodes but each are two hours long. The first episode airs this Sunday 7 August at 8pm on ITV and will be available to watch on ITV Hub afterwards.