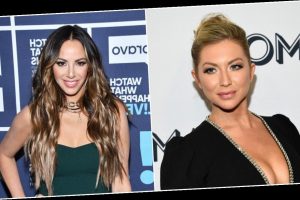 Two reality show stars have to face reality: They’ve been fired for the racist way they treated the only Black co-star on their show.

On Tuesday, Bravo TV canned “Vanderpump Rules” cast members Stassi Schroeder and Kristen Doute for calling the police on castmate Faith Stowers, who is Black. The network fired the twosome after Stowers revealed that back in 2018, Schroeder and Doute tried to get her arrested by falsely implicating her in a crime.

In addition, Bravo dropped newer cast members Max Boyens and Brett Caprioni, both of whom had older racist tweets that came to light last week, according to Page Six.

The network released this statement: “Bravo and Evolution Media confirmed on Tuesday (June 9) that Stassi Schroeder, Kristen Doute, Max Boyens and Brett Caprioni will not be returning to Vanderpump Rules.”

“There was this article on Daily Mail where there was an African American lady. It was a weird photo, so she looked very light-skinned and had these different, weird tattoos. … And I guess this woman was robbing people,” Stowers said. “They called the cops and said it was me. This is, like, a true story. I heard this from actually Stassi during an interview.”

Schroeder admitted to having made that phone call in an Instagram apology she posted on Monday as she was being dropped by various brands, her agent and her publicist.

“It is important that I continue to take accountability for what I have said and done, while pushing myself to do better,” Schroeder said. “I have grown significantly from the person I was then, and I am still filled with remorse and regret for the hurt I caused.”

“I also want to address my former cast mate, Faith Stowers. My emotions over something that happened between our friends outweighed my logic, and there is no excuse for that.”

“I did not recognize then the serious ramifications that could have transpired because of my actions.”

“What I did to Faith was wrong. I apologize and I do not expect forgiveness.”

Bravo TV didn’t say how the terminations will affect “Vanderpump Rules.” Production was shut down in March due to the coronavirus pandemic and no date to start shooting again has been announced, according to Variety.