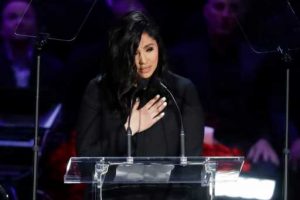 In September, Vanessa Bryant’s mother Sofia Laine gave an interview on talk show El Gordo y La Flaca accusing her daughter of having kicked her out of her home and taken away her car after the death of late husband Kobe Bryant. Vanessa Bryant dismissed her mom’s claims at the time, clarifying that she and Kobe had been supporting her mother for years, and that her mother’s allegations were baseless. Now, Laine has filed a lawsuit against her daughter for financial support, alleging years of unpaid work as a nanny and assistant for the Bryant family. In response, Vanessa is setting the record straight once and for all about her mother’s financial situation, and her “hurtful” and “absurd” attempts to extort the family for more money now.

“For nearly two decades, we arranged for my mother to live in our nearby properties, at no cost to her because she had claimed that she didn’t have any money to buy her own home after her divorce,” Vanessa tells People in a new statement. “My husband and I felt it was best for her not to live in our home. She watched our girls from time to time, just like most grandparents do. She did not take care of business issues or expenses.”

“She now wants to back-charge me $96 per hour for supposedly working 12 hours a day for 18 years for watching her grandchildren. In reality, she only occasionally babysat my older girls when they were toddlers,” she added. “Her claims are obviously false but I still tried, repeatedly, to work things out with my mother.”

In addition to addressing the lawsuit that Laine filed on Tuesday against her daughter, Vanessa discusses the interview her mother gave in September, and her repeated attempts to make amends with her mother since.

“Earlier this year, I was looking for a new home for her and, a week later, she went on television and gave an interview disparaging our family and making false accusations while living rent-free in a gated apartment complex in Newport Coast,” Vanessa says. “Even after that betrayal, I was willing to provide my mother with monthly support for the rest of her life and that wasn’t good enough. She instead contacted me through intermediaries (contrary to what she claims, my phone number hasn’t changed) and demanded $5 million, a house and a Mercedes SUV.

While Laine’s lawsuit alleges that “Kobe Bryant promised to take care of” his mother-in-law “for the rest of her life” and that Vanessa ensured those promises “did not see the light of day as he is now deceased,” Vanessa has a very different view on what her late husband would have wanted here.

“My husband never promised my mother anything, and he would be so disappointed in her behavior and lack of empathy,” she clarifies. “She has no regard for how this is affecting my children and me.”

Vanessa’s second-youngest daughter Bianka recently celebrated her 4th birthday, and she marked the occasion with a sweet photo reminder of Gianna, her daughter who died in the helicopter crash alongside Kobe this past January. While we may never know exactly what happened between Laine and the Bryant family, it’s devastating to see the family suffer any more public turmoil after this already tragic year.

END_OF_DOCUMENT_TOKEN_TO_BE_REPLACED

END_OF_DOCUMENT_TOKEN_TO_BE_REPLACED
We and our partners use cookies on this site to improve our service, perform analytics, personalize advertising, measure advertising performance, and remember website preferences.Ok